Forensic police collect evidence at the scene of the fatal shooting in Bacho district, Narathiwat, in which a 40-year-old woman and her 18-year-old daughter were shot dead in a drive-by shooting on Saturday morning. (Photo by Waedao Harai)

NARATHIWAT: A woman and her teen daughter were shot dead in a drive-by shooting before assailants fled with their motorcycle in Bacho district on Saturday morning.

Police, soldiers and rescue workers rushing to the scene found the bodies of the two victims in a pool of blood on the road. Nittaya Kaenruang, 40, sustained two gunshot wounds to the right ear and chest. Her daughter, Atchariya Kaenruang, 18, was shot near the right ear and the back. Their bodies were sent to Bacho Hospital for post-mortem examinations.

A police investigation found that Ms Nittaya was riding a motorcycle from a local market to her home, with her daughter riding pillion. On the way, two men on a motorcycle followed them. When they reached the scene, the pillion gunman allegedly opened fire at them, causing Ms Nittaya to lose control of her bike, which plunged into a roadside ditch. The gunman then walked towards the two victims and fired more shots at them near the ear. He then fled on the victims’ motorcycle.

Pol Lt Col Supachai Supakitjarak, investigation chief at Palukasamor police station, ordered a manhunt for the assailants. Police manning road checkpoints along the escape routes were also asked to block the stolen motorcycle and the suspects for fear the stolen vehicle would be used in a motorcycle bomb. 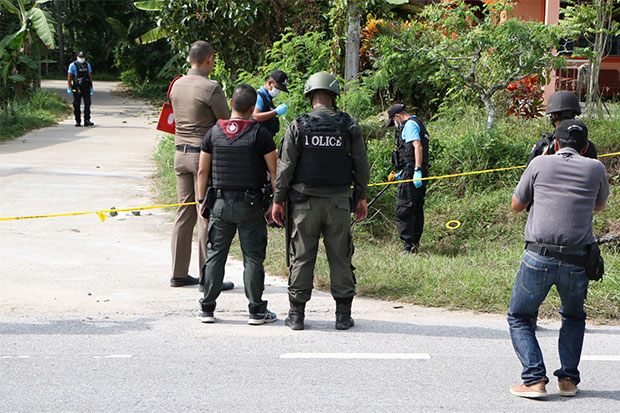 Police and soldiers cordon off the shooting scene in Bacho district, Narathiwat. (Photo by Waedao Harai)