A bird's eye view of the disputed Doi Suthep housing project for judicial officials taken in early May. (Photo from Facebook@Shinshiro Kenji Arthur)

Having been forced by public opinion to abandon a billion-baht office and housing complex that has scarred Doi Suthep in Chiang Mai, judicial officials plan to relocate to a new site in Chiang Rai.

The Courts of Justice management committee, chaired by Supreme Court president Cheep Julamont, made the decision at meetings in Chiang Rai on Thursday and Friday, Saravud Benjakul, secretary-general of the Courts of Justice, said on Saturday.

The decision followed large protests earlier this year by Chiang Mai residents against the use of the 99%-completed houses at the foot of Doi Suthep. They said the project had left a large swath of once lush forest hideously bare and destroyed the view of the popular mountain.

Both sides agreed at a government-mediated meeting to complete the project but that the structures must not be occupied. However, numerous photos and videos posted online have shown some structures occupied.

The entire 148-rai project, comprising houses for judges, flats and houses for officials and two office buildings for the Appeal Court Region 5, cost taxpayers one billion baht in total.

On Thursday, the judicial officials’ panel visited the Chiang Rai Horticulture Research Center, a unit under the Department of Agriculture, where the new Appeal Court Region 5 office would be built.

The panel later decided the site should be used for the housing project for judicial officials as well.

Mr Saravud said the courts would ask the government for a new budget to start the project. He declined to say what would happen to the project at Doi Suthep, saying it was up to the government. 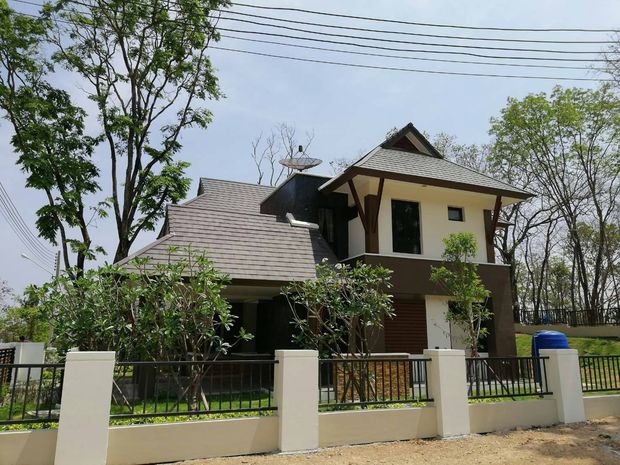 An almost completed house at the residential project for judicial officials at Doi Suthep. (Photo from Facebook@ ขอคืนพื้นที่ป่าดอยสุเทพ)