A Myanmar violinist missing for over 10 days was found in a hospital in Bangkok on Monday, where he was receiving treatment for a broken arm.

Mr Nyein Chan Oo, 39, had vanished from a condominium in Bangkok's Huai Khwang district on Aug 2. He was last seen in CCTV footage entering a taxi at The Street shopping mall on Ratchadapisek Road.

The man, a well-known Myanmar violinist and nephew of a local official, was found in treatment at Nopparat Rajathanee Hospital.

Pol Maj Gen Surachate Hakparn, deputy commissioner of the Tourist Police Bureau (TPB), on Monday said Mr Nyein Chan Oo was found in the hospital in stable condition. He had sustained minor injuries and reportedly looked dazed. A doctor would be asked to examine whether his condition was caused or exacerbated by substance or alcohol use.

The deputy TPB chief said it was unlikely that the musician had been assaulted, adding that adding his condition was not worrying.

The violinist was to remain under medical care for the time being before being sent back to his home country. An entry record showed Mr Nyein Chao Oo entered Thailand only once, said Pol Maj Gen Surachate during a media briefing at the hospital.

Pol Maj Gen Sompong Chingduang, deputy commander of the Metropolitan Police Division 2, said Hua Mak police had earlier received a complaint that an unidentified man was running amok and shouting at Wat Thep Leela on Aug 3. The officers took him to the police station, where he refused food. They sent him to Nopparat Rajathanee Hospital on Aug 5. 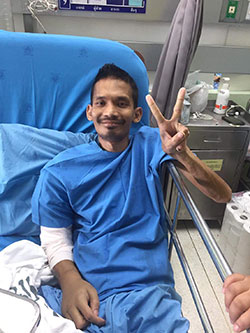 Relatives of the Myanmar man told police that he suffered from lung disease. Police asked the relatives whether he was taking medicine that might cause confusion or apparent intoxication, Pol Maj Gen Sompong said.

A nurse said Mr Nyein Chan Oo was conscious when he arrived at the hospital, but ignored instructions from medical staffers. The hospital was unable to determine whether he had been physically assaulted or not, said the nurse.

A medical examination found bruising on his upper right arm, which was found to be broken. The hospital fitted him with a splint and it would take about one month for him to recover, the nurse said.

The violinist's fiancee, Myint Ohnmar, 39, had filed a missing person report with Sutthisarn police after he disappeared from his apartment in Huai Kwang area on Aug 2.

The couple were visiting Thailand together when he vanished.