The surgical glasses stolen from a surgeon's residence in Khon Kaen on Aug 6. The item was later returned to him after he posted a plea for help on Facebook. (Photo by Chakrapan Natanri)

KHON KAEN: A surgeon burst into tears after his 80,000-baht surgical glasses stolen by a thief were returned to him.

Pol Col Chamlong Suwalak, chief of Muang police, gave the stolen glasses to the surgeon on Friday after receiving them from a downtown pawn shop operator.

Earlier, Dr Thiti desperately appealed to a thief who broke into his residence earlier to return the glasses.

Images of the stolen surgical glasses with a message appealing to the thief went viral online after the surgeon posted it.

On his Facebook page, the doctor wrote "Dear All, I'm Dr Thiti Chanmayka, a cardiothoracic surgeon at the Queen Sirikit Heart Centre, Sringakarind Hospital. A thief broke into my residence in the compound of Khon Kaen Univesity on Aug 6 and fled with my surgical glasses (as shown in the images). This pair of glasses is important for surgery work.

"I appeal to Facebook administrators and Facebook users for help passing the message so a person who found or bought this item could return it to me. The glasses were customised for me and other people could not use them. Many thanks.’’ (continued below) 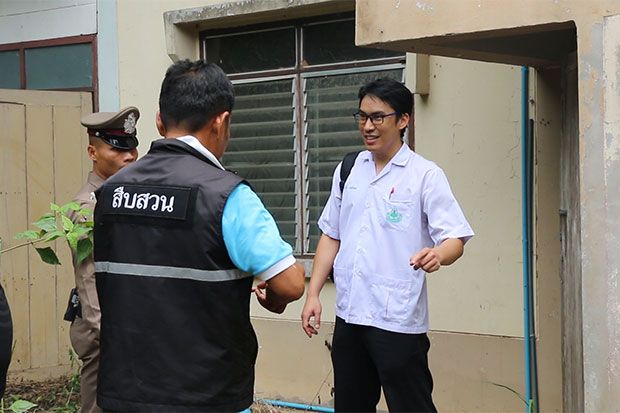 Pol Lt Col Adisak Ngamchad, chief of Khon Kaen University’s police station, said police and forensic officials had inspected the surgeon’s residence and found the back door was forced open. The thief had made off with coins, amounting to 300 baht.

A  police investigation found that Dr Thiti went to Udon Thani on Aug 3 and returned to his official residence on the morning of Aug 6 only to discover the break-in. He alerted police.

At the time, he was not aware the surgical glasses had disappeared.

Pol Lt Col Wissanu Chanphol, investigation chief of Muang district police station, said the thief had ransacked the bedroom before making off with coins and a bag containing the surgical glasses.

Police were tracking down the thief, fearing he or she might throw the glasses away, thinking they were of no value, said the investigation chief.