How to pad farmers' pockets

Successfully growing rice on a commercial scale for domestic consumption and export relies on the properly controlled use of chemicals to lift crop yields, according to experts.

And now the United Nations has prescribed a set of performance indicators to measure the use of chemicals, among other considerations, required for large-scale rice farms to help curb costs and limit the risks to the health of farmers not just consumers.

Two groups of farmers in Ban Non Daeng in Warin Chamrap district of Ubon Ratchathani have followed the farming method guided by these indicators, which has integrated well with their traditional ways of cultivating rice.

The farmers have been supported by local and international agencies in their drive to adopt the UN's Sustainable Rice Platform concept (SRP) for the long-term development of the economy and environment.

The SRP is a multi-stakeholder platform established in December 2011. It is co-convened by the UN Environment and the International Rice Research Institute (IRRI) to promote resource efficiency and sustainability in trade flows, production and consumption operations, as well as supply chains in the global rice sector.

The Rice Department, which falls under the Ministry of Agriculture and Cooperatives, has joined with international organisations in conducting a pilot version of the so-called SRP Sustainable Rice Cultivation Standard.

The project was launched with the participation of two rice farmer groups in Ubon Ratchathani in late 2016.

According to the SRP, the collaborative project began with an orientation for participating farmers, followed by a full training programme. Three months after the project came about, an external audit verified that 84% of farmers were complying with the SRP Standard.

The independent third-party assessment was conducted by OneCert auditors, who were trained and accompanied by assurance experts.

During the pilot phase, Olam International -- a global agri-business that grows, sources, trades and processes food and industrial raw materials across 16 product platforms for over 13,000 customers -- facilitated liquidity for participating farmers. The company engaged a major miller who agreed to buy everything at a competitive price.

The arrangement guaranteed a better price for farmers as it simplified the value chain by means of avoiding brokers and other middlemen. By the end of the pilot phase, 400 tonnes of rice had been produced, according to the SRP.

It cited the strong commitment and contributions by participating organisations from different sectors as a key factor in the success of the scheme, which is expected to be extended to more farmers' groups in the coming years.

Experts say there are limited options for farming rice to be sold at commercial volume. For example, they can't use organic methods, which are better suited to smaller plots.

Production costs are typically high, bloated by the cost of fertilisers, seeds and labour. Many farmers wind up trapped in debt they can't shake off. Those who manage to break free usually do so by growing high-grade, low-investment rice for which there is a small but growing market.

Some of the organic rice is supplied to a niche market that commands high retail prices.

But when it comes to producing the rice commercially, stable supply is the key as it must be systematically controlled and managed with reliable quality inspection, the expert said.

The SRP said it is developing an IT-based data collection tool, which will be supported with standardised formats for record keeping to measure important performance indicators.

The indicator on pesticide-use efficiency is related to the SRP's guiding principle of resource-use efficiency. It is assumed that improved pesticide management leads to increased farm profitability (through increasing yield and/or decreasing input costs), decreased environmental contamination by pesticides (leading to improved biodiversity and human health), and greater food security.

The measurement is done via a scorecard. This covers topics including the use of registered products, the calibration and maintenance of pesticide application equipment, following label instructions, and managing weeds, insects, diseases, molluscs and rodents.

Participating farmer Kriengkrai Chanpeng, 60, said he wanted to try the project out to see if it could lift him out of extreme poverty.

He said he has done everything suggested by the instructors, including changing from scattering paddy seeds to hand-dropping them to prevent paddies from growing outside of the intended areas. He said this has helped him save dozens of kilogrammes of seeds.

Meanwhile, the nutrient content of the soil is regularly tested to determine when and where the fertiliser is needed, which also keeps farmers from applying it where it is not needed. This way, the cost of production can be slashed by half, officials say.

"At least now I'm investing less money in the farm, and I can sell the rice at higher-than-market prices if customers are willing to pay," Mr Kriengkrai said.

Ubon Ratchathani is the country's top rice-producing province, earning more than 10 billion baht a year. It is one of four provinces to join the BRIA project with the support of Deutsche Gesellschaft für Internationale Zusammenarbeit (GIZ) GmbH, which provides services in the field of international cooperation for sustainable development.

The purpose of the cooperation is to raise the living conditions of farmers in Asia by improving the quality of the rice they grow and helping them reduce their investments.

Suriyan Vichitlekarn, GIZ's deputy cluster coordinator for agriculture and food, said producing higher-quality rice at lower cost may only be half the answer. The real challenge is how to find a market where farmers can sell the grains at reasonable prices, he added.

The firm finally came up with the idea of establishing the Market Oriented Smallholder Value Chain (MSVC).

This seeks to promote rice-plantation development modelled on the SRP. Over the next five year, the project will take shape in Ubon Ratchathani, Roi Et and Surin targeting about 16,000 farmers.

"We've demonstrated how [locally produced] rice has met the SRP standard," he said.

"Customers worldwide want good-quality rice that is safe to consume and friendly to the environment," he added.

Auditors inspect the farmland to see whether the growing and harvesting methods are in line with the SRP standard. Certified crops are then sold via the MSVC scheme at lucrative prices.

Satish Thampy, director of Olam, a top rice trader based in Singapore, said the company knows how important sustainability is for farmers who form a part of its business. The company has worked with 4 million farmers globally as it promotes sustainable farming.

Mr Thampy said customers can be quite fussy about the quality of the rice they consume, and many want to support the environment. They also want to see fewer pesticides used and uncontaminated water resources.

"Olam is ready to buy rice from farmers who comply with the SRP standard. Customers will have more confidence that the crop is safe to eat, friendly to the environment and provides a source of stable income for farmers," he added.

Despite this, only about 7,000 tonnes of SRP-standard rice can be cultivated each year. This pales in comparison to the 600,000 tonnes of rice the company trades annually.

Mr Thampy said the supply of SRP-certified rice will grow as demand is tipped to rise.

Apichart Pongsrihadulchai, chief adviser to the Rice Department, said the SRP project complements the Pracharat policy, in which the private and government sectors help farmers get fair prices for their crops.

He said Thailand is the first country to put the SRP standard into practice, which helps spread the word that the kingdom grows premium-quality rice.

Yet he cautioned farmers not to undercut each other to secure more market share as lowering production costs is safer in such a volatile market. 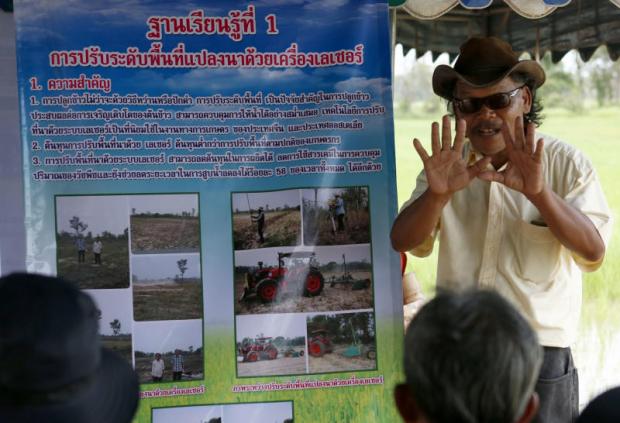 An instructor educates farmers about how their soil can be improved with the aid of new technology. 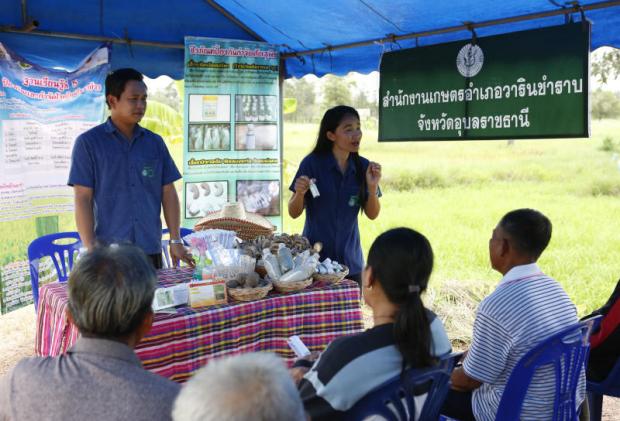 Experts from the agriculture office in Warin Chamrap district of Ubon Ratchathani explain about the controlled use of pesticide to increase rice yields. 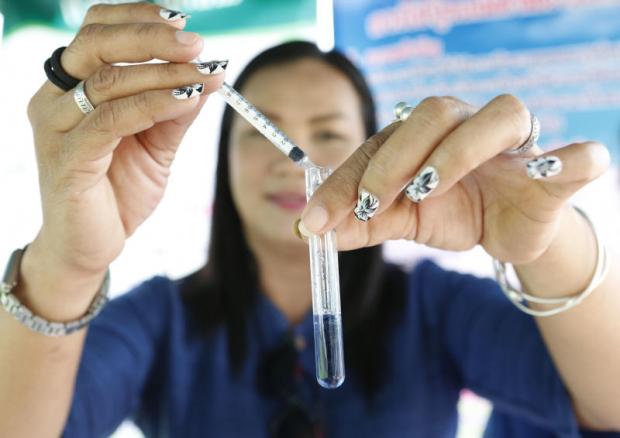 A specialist shows how to produce a chemical reaction during a soil analysis study. 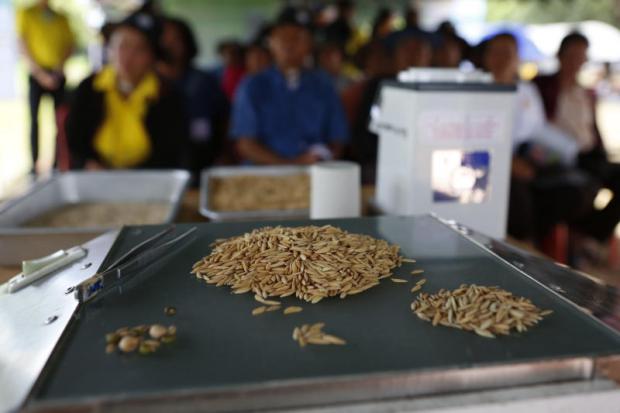 High-quality seeds are one of the keys to strong seedlings. 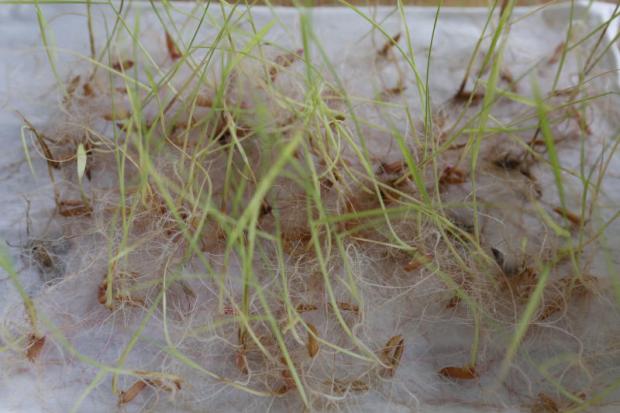 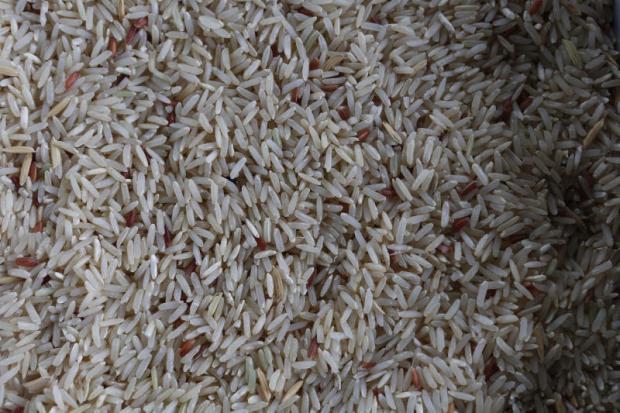 Farmers release fish into an experimental rice field that was flooded after the seedlings were planted. 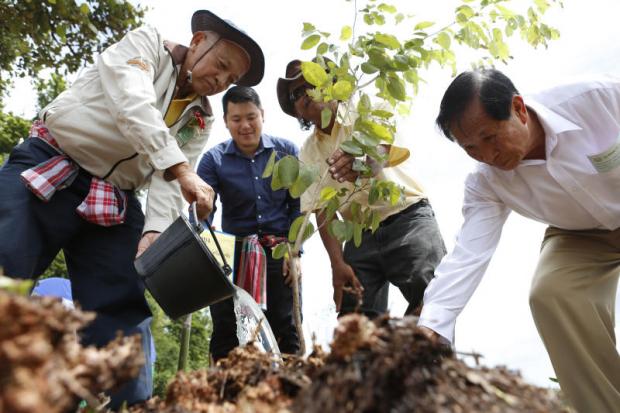 People attending a rice workshop water a tree in a symbolic gesture of cooperation to improve the quality of the crops grown. photos by Pattarapong Chatpattarasill