A flat-bottomed boat is deployed to distribute necessary items to people in flooded-hit areas in Nan as the Nan River and its tributaries burst their banks, sending a huge volume of water to flood several districts. (Photo by Rarinthorn Petcharoen)

NAN: The Nan River and its tributaries burst their banks, flooding more than 1,000 households in seven districts.

The rising water caused the river and its tributaries to burst their banks. A large volume of water flooded riverside houses in seven of 15 districts -- Chiang Klang, Pua, Tha Wang Pha, Mae Charim, Santisuk, Muang and Phu Phiang. More than 1,000 households were affected.

In Phu Phiang district, riverside communities in tambon Fai Kaew, Muang Tued and Nao were most affected. Floodwater on the Saeng Dao-Tha Lor route rose to 1.3m Saturday morning, making it impassable for all vehicles.

Nan governor Paisarn Wimonrat on Saturday led municipal officials and soldiers to put up sandbag walls along the water embankment at Ban Suan Tanlang in Muang district to prevent runoff from entering inner and economic areas.

Surapon Thiansoot, mayor of Muang municipality, said northern runoff was flowing into Nan province, causing water levels at major rivers to rise. A survey found 31 communities in municipality areas would be flooded. Of them, 21 were at risk as they were located along the Nan River, said the mayor.

Officials raced against time to plug leaks along the water embankment and install water pumps in affected areas. 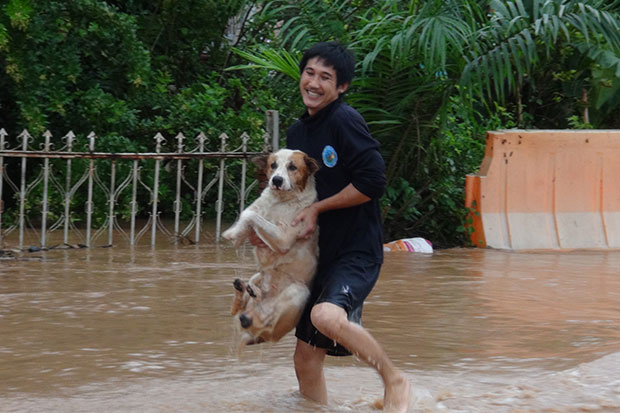 An official carries a dog from a flooded house in Phu Phiang district of Nan as the Nan River bursts its banks. (Photo by Rarinthorn Petcharoen) 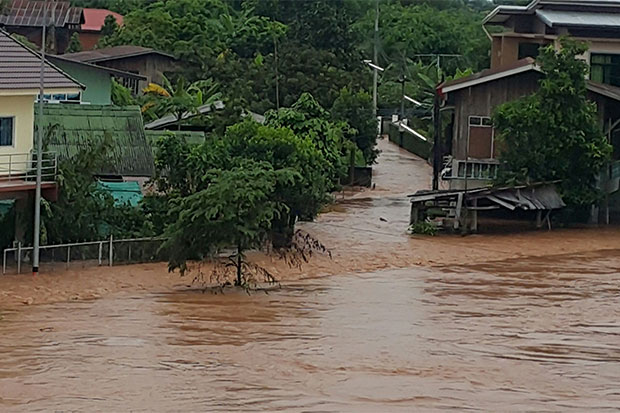 A huge volume of water from the Nan River and its tributaries flows into riverside houses in Phu Phiang district this morning. (Photo by Rarinthorn Petcharoen)