The 22km Brown Line monorail between Lam Sali and Nonthatburi Civic Centre (route map below) was originally approved exactly five years ago this week, but then ran into controversy, especially from Kasetsart University. (File photo)

Initial plans for the controversial MRT Brown Line monorail project from Khae Rai in Nonthaburi to Lam Sali are set to be submitted to the cabinet for review, the Office of Transport and Traffic Policy and Planning (OTP) says.

Director-general Chaiwat Thongkamkoon made the announcement after a third and final public hearing on the project was held Thursday. He said a timeline for construction and an official opening can only be set once the cabinet approves the OTP's studies, which started last year.

However, the project has been met with disapproval from residents and public institutions along the planned route, causing confusion about when it can actually be submitted to the cabinet.

While most bodies have openly agreed with the construction of the monorail network to ease road traffic, much of the controversy lies in the government's plans to construct a new expressway extension around Kasetsart University in Bang Khen district as part of the project.

While original plans involved constructing the stretch directly above parts of Kasetsart, the OTP has opted to go around the university after its officials blasted the government office for going through with plans which would "increase pollution for those living in the Bang Khen area".

The government had earlier instructed the OTP to include the expressway extensions as part of the monorail project to make use of the pillars along Prasert Manoonkij Road, which were part of an abandoned project from 1994.

An OTP source said the compiled study results could be submitted to the cabinet by October. According to the authority's reports, the new expressway extension will likely be open in 2024 while the monorail network could be open in 2025.

The MRTA Brown Line monorail is set to be 22.1km long, and will pass through Ngam Wong Wan, Prasert Manookij and Nawamin roads.

It will be linked to seven other train routes, including the Purple, Orange and Red lines. Its 20-station route has been valued at around 50 billion baht.

Members of the public who attended Thursday's final public hearing voiced fierce opposition against the project, and criticised the monorail study results for lack of clarity.

"Some numbers I heard, such as the value of land expropriation for the construction of the highway, are very high, yet these weren't announced until I found out from the media," said Tanate Wareesangtip, a 37-year-old business owner. 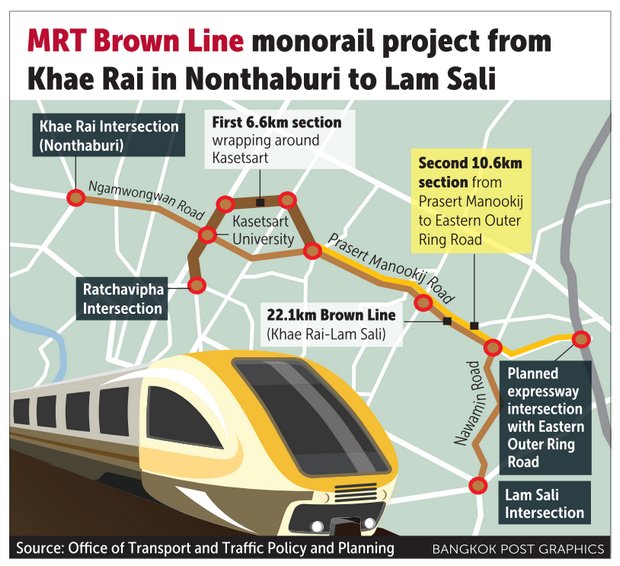