Surat Thani police say they will summon the alleged British rape victim to return to testify but the gir's mother said that will never happen. (Photo provided)

SURAT THANI: Police in the southern province are to summons the British girl, 19, who was reportedly drugged, raped and robbed on Koh Tao and her British male friend for questioning to verify the report.

But in a telephone interview with a Thai TV station, the mother of the alleged victim said from England police can forget about that.

"I'm not letting my daughter go back," the woman told veteran Thai journalist Suthichai Yoon in an interview on Facebook Live.

Police hoped that would be reversed. "The case being concluded depends on the cooperation of the person concerned. Please understand the duties of interrogators and the impact on residents of Koh Tao and Koh Phangan," said Pol Col Wichob Kerdkliang, deputy commander of Surat Thani police.

Pol Col Wichob said on Tuesday that his office was drafting the summons for the woman and her male friend Martin Malachi, 20, for the interrogation.

Media reported that the man with her on Koh Tao met local police to file the rape complaint without the girl being present.

Police want to ask the girl about her lost valuables and the reported rape and seek the clothing with semen stains, which she said she kept, Pol Col Wichob said.

That item, reportedly a black T-shirt worn by the British teenager, could boost the probe after traces of foreign DNA, believed to be from the alleged rapist, was found on it, according to a report by The Sun newspaper.

The victim sealed it in a plastic bag and handed it to police in the UK because she did not trust Thai officers — and it may now be tested in the UK to help identify the attacker, the report said.

The teen's mother claimed in the Sutichai interview that Koh Tao island, which is both notorious and incredibly popular with western backpackers, is run by gangsters that left her daughter so scared she fled.

She said her daughter passed out shortly after being drugged and woke up on a beach with no underwear on near the spot where British backpackers Hannah Witheridge and David Miller were found dead four years ago.

The woman also claimed her daughter wanted to get off Koh Tao as soon as possible, fearing for her safety. She says her daughter believed she could report the crime on nearby Koh Phangan but police told her they had no jurisdiction there.

Martin, described in some media as the alleged rape victim's boyfriend, is just a friend, the mother said during the interview with Sutichai.

Media reported that Martin and her boyfriend were with the 19-year-old woman on Koh Tao and met local police to file the rape complaint without the teenager's presence.

Police would ask the girl about her lost valuables and the reported rape and seek the clothing with sperm stains she said she kept, Pol Col Wichob said.

In the meantime, local police were questioning people who were close to the alleged crime scene between June 21 and 26, inquiring about how the girl spent her vacation and the exact dates she was on Koh Tao, he said.

The British girl had visited the country three times since March and stayed for about 30 days each time. The latest visit started on June 13 and she left the country on July 2, Pol Col Wanchana said.

Pol Maj Gen Apichart Boonsriroj, Surat Thani police commander, said the alleged rape occurred at 1.30am on June 26 in a location that police found was crowded at the time due to live coverage of a World Cup 2018 match.

Police patrolled the area at 3am the same morning and seven surveillance cameras within a 300-metre radius of the location on Sairee beach remained functional, Pol Maj Gen Apichart said.

The commander repeated that the girl did not file her rape complaint right away although her hostel owner urged her to do so. Instead, the girl went to Koh Phangan for a full moon party and informed Koh Phangan police in the afternoon of June 27 of the loss of her valuables on Koh Tao -- but not of the rape, he said.

"When the case can be concluded depends on the cooperation of the person concerned. Please understand the duties of interrogators and the impact on residents of Koh Tao and Koh Phangan," the Surat Thai police commander said.

"The recent reports affect tourism. Local administrators and operators are trying to explain that the case is not as serious as the way it was reported, and tourism in the locations continues as normal." 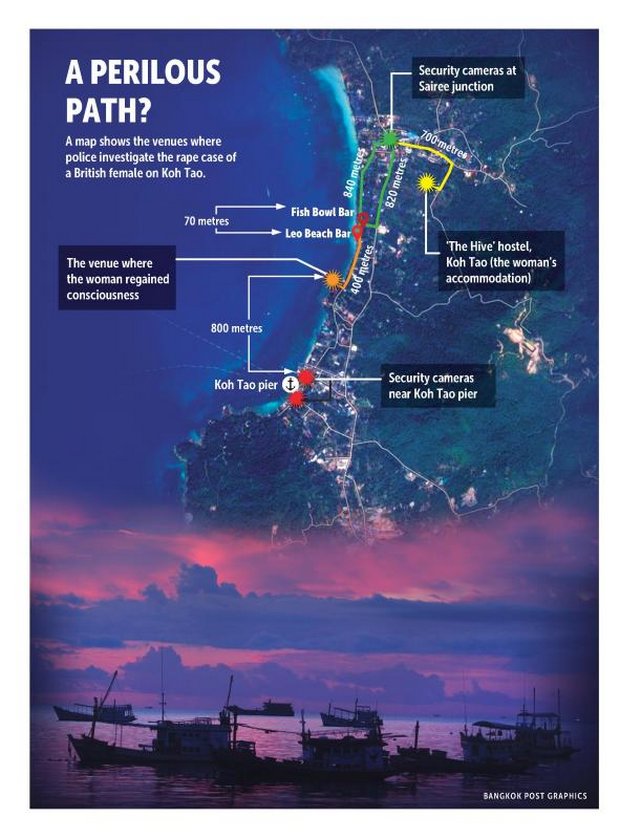