Mr Prasit said he had been ready to report to the DSI since Monday but had to wait for Mr Saarimaa so they could hold the negotiations together with police.

Mr Saarimaa is "my friend and work colleague", Mr Prasit said, claiming they both fell victim to the scam, allegedly masterminded by Prinya Jaravijit, a prime suspect who has reportedly fled to the United States during the Department of Special Investigation's probe.

The two sides declined to elaborate what they discussed but signalled the outcome met their demands.

"My talks with them [Mr Prasit and Mr Chakris] turned out to be very satisfactory but I cannot give any details now," Mr Saarimaa said.

If they can reach a settlement, which is allowed by law in fraud cases, Mr Saarimaa can withdraw his complaints against the two suspects, Pol Col Chakrit said. 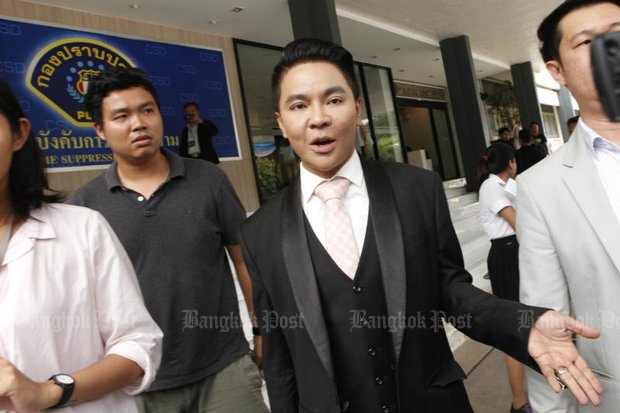 The Finnish investor, together with Thai businesswoman Chonnikan Kaeosali, complained to the CSD earlier about losing a total of 797 million baht to Mr Prinya's group, which allegedly lured the two into making huge investments by buying the shares of three firms including, Mr Chakris' Expay Software Co, last June.

Ms Kaeosali and Mr Saarimaa were also told to pay money in the form of bitcoins, a popular virtual currency, which was later secretly withdrawn by the suspects, according to investigators.

If Mr Prinya, who disappeared after the scam, fails to appear, the officers will seek a court warrant for his arrest.

Mr Prinya and Mr Jiratpitsit have been already charged with money laundering.

The CSD is also considering pressing the same money-laundering charges against the parents of Mr Prinya after questioning them on Monday.

The couple's bank accounts held 90 million baht allegedly transferred by Mr Prinya, although the two insisted on their innocence during questioning.