The Mekong River is approaching a two-decade peak in Nakhon Phanom province. Warnings of flooding caused by overflowing rivers have been issued for the Central Plains and along the Mekong River. (Photo by Pattanapong Sripiachai)

Flood warnings for riverside communities on the Central Plains and along the Mekong River, which is forecast to hit a 20-year peak on Friday night.

Surachart Malasri, irrigation director at the Chao Phraya dam in Chai Nat province, on Friday warned residents of low-lying areas along rivers in seven provinces of the Central Plains that the dam had to increase its discharge rate to cope with the rapid inflow after heavy rains.

The inflow to the Chai Phraya dam was measured at 1,138 cubic metres per second in Nakhon Sawan province, raising the water level at the dam. The discharge rate had been raised to 800 cu/m per second.

River levels would rise by 60-80 centimetres in Sena and Phakhai districts of Ayutthaya, Mr Surachart said.

He said the dam was already at 94% of capacity, which exceeded the upper rule curve of the dam.

The faster discharge rate would raise the level of the Kwai Noi River in Thong Pha Phum and Muang districts of Kanchanaburi by about 50 centimetres and cause flooding in low-lying areas there.

In Nakhon Phanom province, the level of the Mekong River was expected to peak at 13 metres on Friday night, the highest in about two decades. The river was rising due to accelerated discharges from dams in Laos. Some low-lying areas beside the river in Muang district of Nakhon Phanom were already flooded.

Parts of Tha Uthen were already flooded due to overflows from the Songkhram River, a tributary of the Mekong. 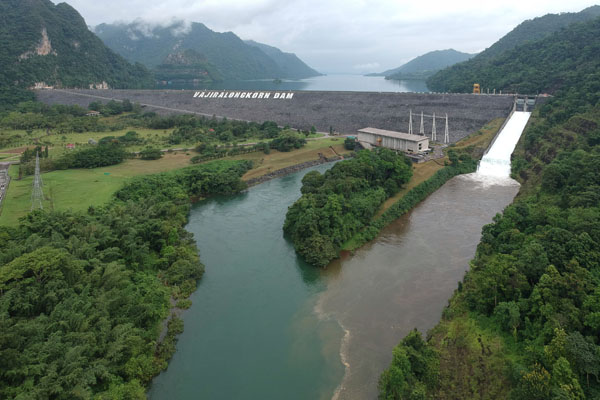 Water pours down the spillway at Vajiralongkorn dam in Kanchanaburi province on Friday. The rate will be further increased throughout September. (Photo by Piyarach Chongcharoen)

The latest coronavirus cases include a Brazilian volleyball player and his wife, and a trader from India.