Royal Bodhi tree may be saved, after abbot cut it down
Thailand
General

Royal Bodhi tree may be saved, after abbot cut it down

Officials transfer the stump of the royal Bodhi tree from the hilltop temple in Prachuap Khiri Khan to a research centre. (Photo by Chaiwat Satyaem)

PRACHUAP KHIRI KHAN: Efforts are being made to regenerate a Bodhi tree planted by the late King Bhumibol Adulyadej at a hilltop temple about 60 years ago, after the abbot decided it was dead and ordered it cut down.

The old tree was stripped of all its branches and then the trunk cut through, leaving only the short stump above the ground.

The demise of the royal tree at Wat Thammikaram Voraviharn on Khao Krachok mountain in Muang district has saddened local residents, who hope fervently it can be regrown.

Forestry officials and silviculture experts have been tasked with regenerating it. The surrounding soil will be replaced and fertilised and hormone and anti-fungal treatments applied.

Khongsak Meekaew, from the RFD, said he regretted arriving too late to save the royal tree from being cut down. He expressed his thanks to local residents who initiated the move to save it. (continues below) 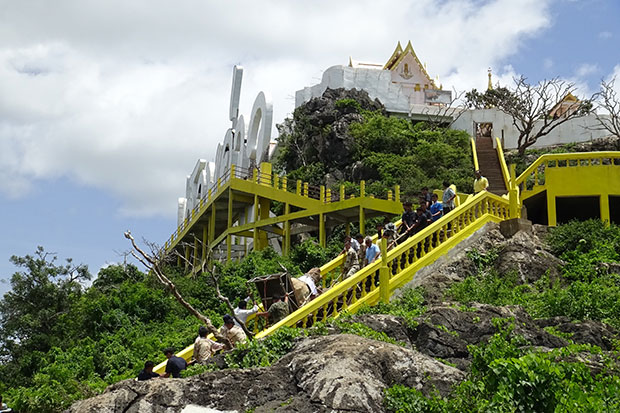 The cut down royal Bodhi tree is removed from Wat Thammikaram Voraviharn on Khao Krachok mountain in Muang district on Friday. (Photo by Chaiwat Satyaem)

An examination found some living cells in the stump, raising hopes that the tree could regenerate, Mr Khongsak said.

On Friday the cut down tree was removed to the provincial silviculture research station. The stump was also removed, but the root system would not be dug up as it contained living cells and could possibly be revived, he said.

He admitted it would be a difficult task, but his team would do its very best.

A seedling was also found sprouting near the tree. A DNA test would determine if the seed came from the old tree, Mr Khongsak said

His team would consult provincial authorities about whether to take it to the nursery for cultivation, or let it grow where it is.

Provincial authorities had earlier asked all districts to locate and list trees planted by the late king. There were about 300 trees, but the survey has not yet been completed.

Mr Somporn said a fact-finding panel had been set up into the cutting down of the Bodhi tree.

When its work was complete, provincial governor Wallop Singhasenee would submit the findings to the Interior Ministry and ask for a pardon from His Majesty the King.

The temple abbot had admitted he ordered the tree chopped down because it had only a few dry leaves and he thought it was already dead. 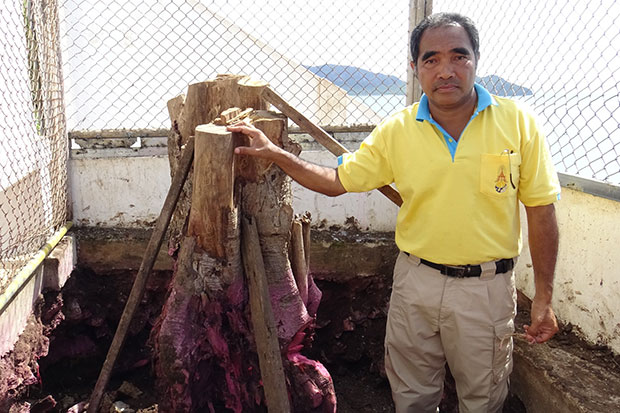 The stump of a royal Bodhi tree. (Photo by Chaiwat Satyaem) 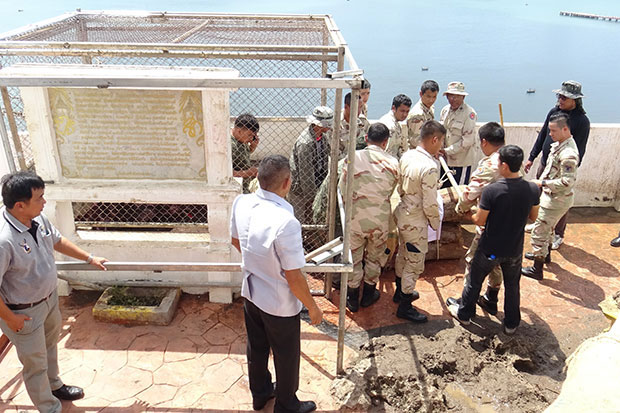 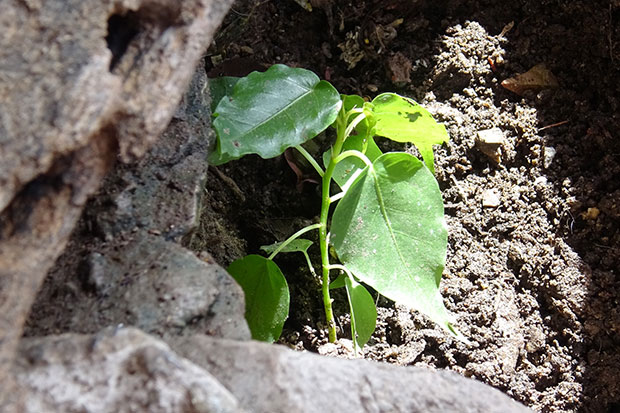 The young sprout found near the cut down Bodhi tree. (Photo by Chaiwat Satyaem)