KHON KAEN: Panicking passengers, including children, jumped from a driverless pickup truck as it rolled across a road and into a canal after the woman driver got out to withdraw money from an ATM.

A video clip of the incident, at a PTT petrol station in tambon Sok Nok Ten of Phon district on Sunday, went viral on social media on Monday night.

Wuthichai Muensriprom who posted the clip said it occurred about 11.30am on Sunday.

The woman driver stopped the pickup on the sloping exit from the fuel outlet and got out to withdraw money from an ATM, leaving the engine idling. There was a woman passenger in the front seat and three children, aged 4-5 years, on the back.

The driverless vehicle then slowly rolled across the road in front of the petrol station, into some shrubbery and finally ended up in the nearly dry roadside canal.

"While the truck was moving, a woman opened the door and jumped out. Three children, aged 4 or 5 years, also jumped from the tray. Luckily no other vehicle was passing on the road, and nobody was severely hurt," Mr Wuthichai said.

Rescue workers called to the scene towed the truck back up out of the canal. The driver told them that she had engaged the handbrake, but a quick check found she had not. 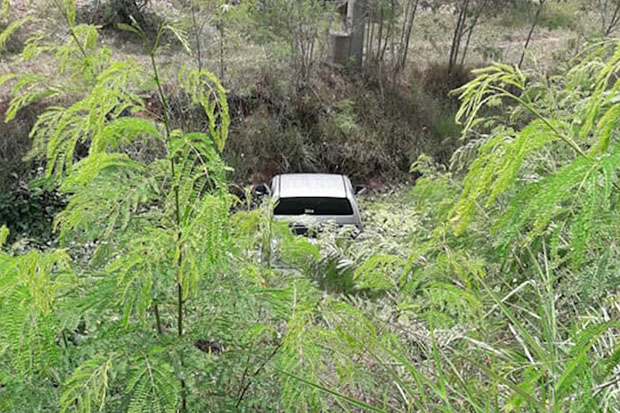 The driverless pickup truck rests in the roadside canal after it rolled across the road from a petrol station in Phon district, Khon Kaen, on Sunday. (Photo by Chakkrapan Natanri)

Official assures foreigners will get vaccines

Official assures foreigners will get vaccines