King to send thanks amid hero's welcome

A workman installs lights during a Wednesday rehearsal of the party for heroes and helpers of the July cave rescue. Around 7,000 people are expected to attend. (Photos by Pornprom Satrabhaya)

Thousands of guests were driving down to Bangkok Wednesday ahead of Thursday evening's government-sponsored thank you dinner reception at the Royal Plaza for those involved in the daring Tham Luang cave rescue in northern Thailand in July.

They included over 3,000 people from Chiang Rai, including the 12 young footballers and their coach who were trapped for over two weeks in the partially flooded cave in the province's Mae Sai district from June 23 to July 11.

The guests left the province Wednesday in a fleet of 67 buses to attend the "United as One" event in the capital.

PM's Office Minister Suwaphan Tanyuvardhana, who visited the venue to observe a dress rehearsal Wednesday, said His Majesty the King had granted permission to use the Royal Plaza from 6pm until 9pm Thursday.

His Majesty has also sponsored the provision of Thai and international food including traditional Thai desserts while the government has covered the cost of other popular Thai dishes and beverages, Mr Suwaphan said.

Some 10,000 guests are expected to attend the event, he said. 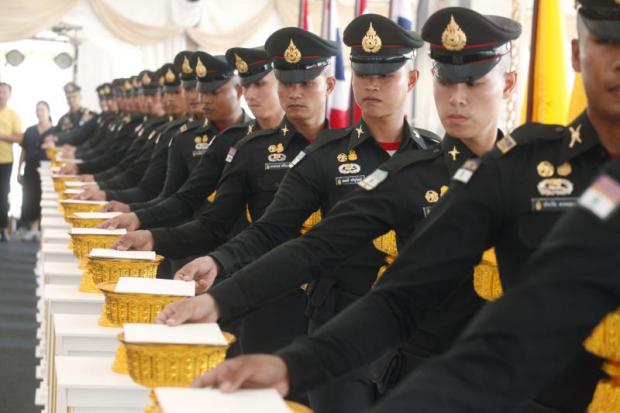 Military officers pose as stand-ins picking up a royal thank-you letter. The letters will be handed to participants in the Tham Luang cave rescue who are invited to the state-sponsored thank you dinner party at the Royal Plaza Thursday evening. Pornprom Satrabhaya

A formal ceremony is planned to convey a note of gratitude from His Majesty to all the guests for each of their respective roles in the historic rescue operation, the minister added.

Tents have been set up and decorated in the style of a lavish grand reception, he said.

"Everything is ready now, with only a few minor changes to possibly be made," said Patcharaporn Intreyonk, the permanent secretary of the PM's Office.

Australian anaesthesiologist Richard Harris, considered a national hero for the role he played in ensuring all the boys emerged from the cave not only alive but unscathed, led a team of Australian officials to visit the headquarters of the Royal Thai Police Wednesday.

The underwater cave explorer, considered one of the world's leading professionals in his field of anaesthesiology, reportedly discussed ways of cooperating in future rescues with Pol Gen Chakthip Chaijinda, the national police chief.

The first will screen requests by Thai and foreign media to interview the 12 footballers and their coach while the second will handle any legal matters which arise pertaining to the 13 young men and their families, he said.

He gave the example of them being approached by filmmakers interested in producing a movie or documentary about their daring escape.

A first round of media interviews with the boys was scheduled for this afternoon at Siam Paragon in Bangkok, with a second round slated for Sept 15-16 in Chiang Rai, said Lt Gen Werachon. Questions are being accepted via a Facebook page called Content Thailand.

They will be screened by the first sub-committee to ensure there is no violation of the children's rights by an over-inquisitive media, he said.