Soldiers search the pickup truck and find drugs hidden in a secret compartment at a checkpoint in Sangkhla Buri district, Kanchanaburi, on Thursday evening. A short time before, the same team had caught a 77-year-old Thai man driving a car also smuggling methamphetamine pills and crystal meth from the nearby border. (Photo by Piyarach Chongcharoen)

KANCHANABURI: An elderly Thai and a young Myanmar man were arrested in separate busts at a checkpoint in-Sangkhla Buri border district, and 31 kilogrammes of crystal methamphetamine and 50,000 speed pills seized with a combined worth of 52 million baht.

A car with Bangkok licence plates was stopped for a search at a road checkpoint on the Thong Pha Phum--Sangkhla Buri road in tambon Nonglu around 5pm on Thursday.

The search uncovered 20.7kg of crystal methamphetamine in wrapped packages hidden in the backseat of the car.

Driver Amporn Nasathi, 77, of Nakhon Pathom’s Kamphaeng Saen district, was arrested. He told police he had been hired to collect the drugs from a Myanmar man at the Three Pagodas and deliver them to a man in Nakhon Pathom.

He was held in police custody at Sangkhla Buri police station on drug charges. 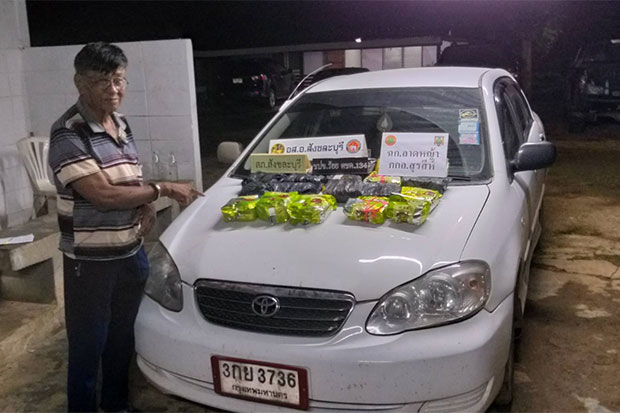 The arrested 77-year-old Thai man and the drugs seized from his car at a checkpoint in Sangkhla Buri, Kanchanaburi. (Photo by Piyarach Chongcharoen)

Less than an hour later  the same team of  soldiers, police and local officials pulled over a pickup truck with Lop Buri licence plates. A search found 29 packages containing 10.9kg of crystal methamphetamine, along with 25 orange and green wrapped bundles containing a total of 50,000 meth pills.

The drugs were hidden in a secret compartment near the fuel tank of the pickup truck.

Driver Lor or Saekor, a Myanmar national, 21, was detained.  Another accomplice managed to flee before the search began.

Authorities said the seized drugs were worth about 52 million baht.

Mr Lor told police he had been hired by a man he knew only as Win to drive the pickup truck with the drugs, park it in front of a convenience store at a market in downtown Thong Pha Phum district, lock it and leave. Someone else would come and drive it away, he said.

He said it was the first time had done anything like that. He had been promised 50,000 baht.

The suspect was taken to Sangkha Buri police station and charged with having illicit drugs in his possession with intent to sell, and illegal entry. 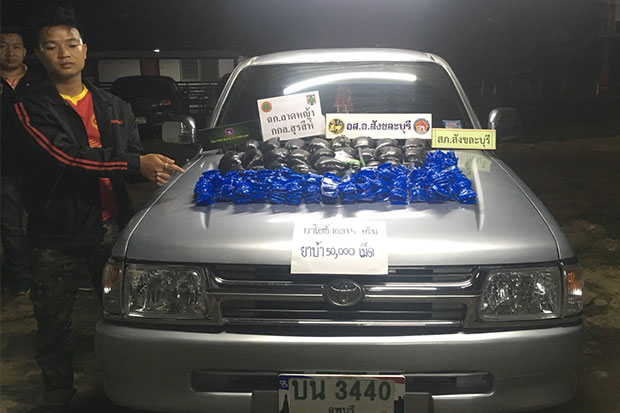 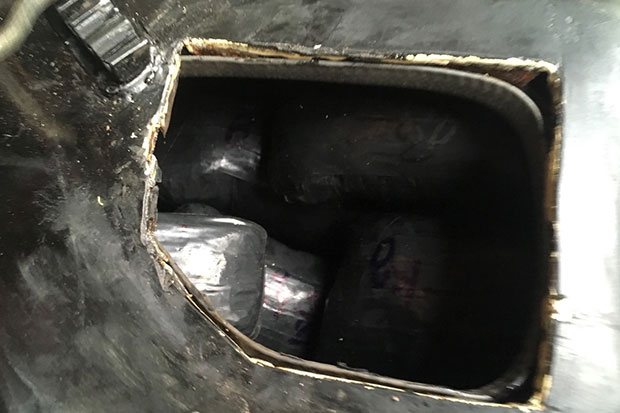 The secret compartment in the pickup where the drugs were hidden. (Photo by Piyarach Chongcharoen)