Attacker Winai Homniam, 41, with a red towel wrapped around his head, in police custody after a German tourist was slashed along the side of the neck near Mor Chit BTS station in Bangkok on Tuesday. (Photo taken from JS100.com)

A 41-year-old man was arrested shortly after a 63-year-old German man's neck was slashed with a knife at a bridge to the BTS Mor Chit station on Tuesday afternoon.

The tourist and his wife were walking near the bridge on outbound-Phahon Yothin Road. He was attacked by a man with a red towel wrapped around his head walking towards them. The man suddenly produced a knife about 10 centimetres long and slashed the tourist along the side of the neck. 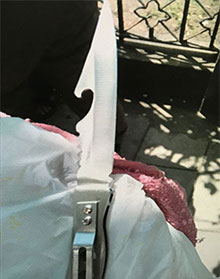 The knife used in the attack. (Photo taken from JS100.com)

The victim was given basic first aid for a knife wound about 7cm long and then rushed to Paolo Phaholyothin Hospital.

After the attack, the assailant kept the knife and went to a nearby bus stop. Motorcycle taxi drivers and other witnesses converged on the attacker and detained him.

When police called to the scene arrived, Winai Homniam, 41, of Surin province, was handed over to them.

During interrogation, Mr Winai claimed he had no intention to attack the tourist. He was on his way to work at a garage in Nonthaburi. He declared that he swung his head to settle the towel, and this somehow caused the knife to accidentally hit the German man in the neck as he walked past him.

Police were not convinced and he was asked to submit to a urine test for drug use.

Pol Col Veeradol Thaptimdee, chief of Bangsue police, said witnesses were still being questioned. It was not yet clear if the man was deranged. Charges would be pressed if he had no history of mental illness. 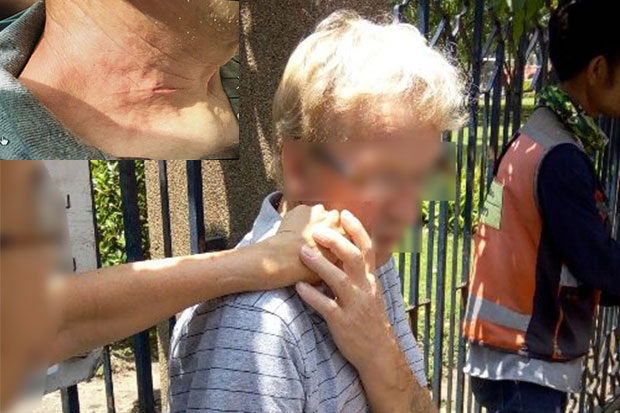