A traffic cam shows traffic at a near-halt on Vibhavdi Rangsit Road in Din Daeng. More rain is on the way from two storms in the region, the according to the weatherman. (File photo)

Thailand, especially its western regions where officials are making "historic" huge discharges of water from the brimming Sri Nakarin dam, will be further hit by downpours triggered by Tropical storm "Barijat" in the South China Sea and Typhoon "Mangkhut" near the Philippines from today until next Tuesday.

Both storms are moving westward, with Barijat expected to whip Hong Kong and Hainan while Mangkhut is predicted to make landfall in southern China, the Meteorological Department warned on Wednesday.

These weather systems will dump more rain on Thailand which has already been soaked by a month of rainfall, battled flash floods in dozens of provinces and fretted over dangerously high levels of water in reservoirs.

The impact of Barijat, with wind speeds near its centre measured at 70 kilometres an hour Wednesday, will be felt first when it hits Hong Kong and Hainan today and tomorrow, the department said.

Rainfall during this period will be intensified by a stronger southwest monsoon in the Andaman Sea, which will also cause higher waves in the upper part of the Gulf of Thailand.

The country will then be faced with the effect of Mangkhut until next Tuesday, the department added.

The typhoon is expected to make its way past Luzon Island in northern Philippines and Taiwan this weekend before hitting southern China between Sunday and Tuesday.

Its arrival in the upper South China Sea will make the southwest monsoon stronger. A result, the department said, is more rainfall, and heavy downpours in some areas, especially regions which "directly face" the monsoon in the western part of the South and the Central Plains as well as the East. 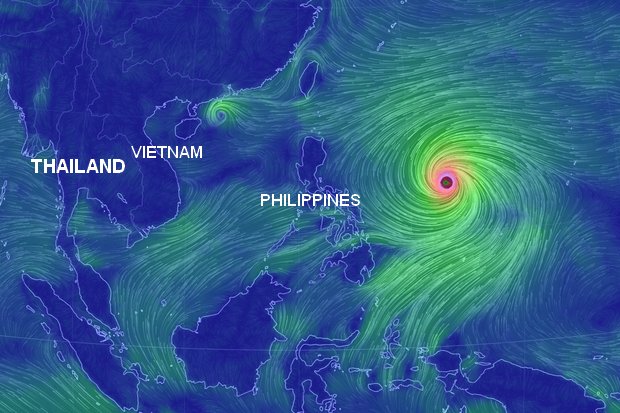 Tropical storm Bajirat (near top left) and super-typhoon Mangkhut, aimed directly at the Philippines and Hong Kong, will bring torrential rain to Thailand through the weekend. (Graphic via earth.nullschool.net) 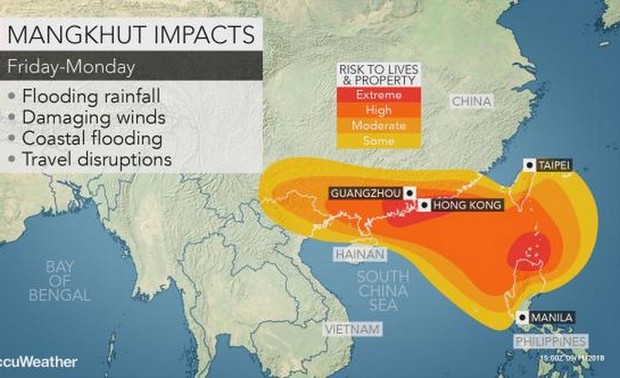 Officials in Kanchanaburi, which is located in the west of the Central Plains, are closely monitoring the situation.

Measures to reduce levels of water in its two major dams are being implemented to ensure they have more room for a next bout of rainfall.

The Sri Nakarin dam, which sits on the Kwai Yai River in Sri Sawat district, can now hold only 1,458 million cubic metres of water as the reservoir was at 91.7% of its capacity, said dam director Prasoet Inthap.

With a continual inflow of water, officials need to increase its discharge rate from 28 to 32 million cu/m a day, the highest amount since the dam began operating 37 years ago, officials said.

They will switch to the new discharge rate tomorrow and continue it until the end of this month.

Another major dam, the Vajiralongkorn, in Thong Pha Phum district, is releasing more water to the Kwai Noi River after its water level reached 95% of capacity. Up to 58 million cu/m of water will be discharged every day until Sept 30.

Riverside communities located downstream were told to brace for the overflow.

Muang district, which is where the Kwai Noi and the Kwai Yai rivers merge and become the Mae Klong River, is expected to be inundated.

When water levels in the first two rivers increase, officials need to closely watch the Mae Klong, which further runs to Ratchaburi and Samut Songkhram provinces before pouring into the Gulf of Thailand.