Mongkol 'Uncle Wong' Uthok, one of the four key musicians of the legendary songs-for-life Caravan band, has died of sudden heart failure. He was 67. (Photo taken from Surachai Chantimatorn Facebook page)

Mongkol "Wong" Uthok, a veteran musician of the legendary songs-for-life Caravan band has died of sudden heart failure at a restaurant in Nonthaburi. He was 67.

The musician, fondly called “Na Wong of Caravan’’ (Uncle Wong), had a meal with friends at Khrua Somkiart restaurant on Nakhon-in Road in Bang Srimuang, Muang district of Nonthaburi province before he fainted and fell at the parking lot, said Pol Capt Suwan Nakya, deputy investigation chief at Bang Srimuang police station, who was reported at 1.30am on Saturday.

Police, medics and rescue workers rushing to the scene found Mongkol unconscious on the ground at the parking lot of the restaurant. Medics gave him first aid but failed to save his life. There were no bruises on his body, Thai media reported.

Chumphon Uthok, 27, son of the 67-year-old musician, said his father was a regular customer of the restaurant. On Friday, they, along with two friends, had dinner at the restaurant but Mr Chumphon left the eatery first at around 7pm.

As it was getting dark and his father had not yet returned home, Chumphon phoned him at around 11pm. His father told him that it was raining at the time. At around midnight, he rushed to the restaurant after being told by one of his father’s friends that his father fainted and became unconscious at the parking lot, said Mr Chumphon.

Doctors said the musician had died of sudden heart failure. His body was sent to Central Institute of Forensic Science for a post-mortem examination.

A native of Roi Et province, Mongkol was one of the four members of the legendary songs-for-life Caravan band. He played several musical instruments, including lute and mouth organ. He was also a painter and composer.  He wrote several songs for his band, including Luk Khuen Soo (Rise Up and Fight) and Kularb Daeng (Red Roses).

A bathing rite will be held at 3pm on Saturday at Wat Pak Nam Phibul Songkham in Nonthaburi’s Muang district.

The four-member Caravan band was formed in 1975 and was particularly active following the Oct 14, 1973 popular uprising and the subsequent Oct 6, 1976 massacre. It has released nine albums. 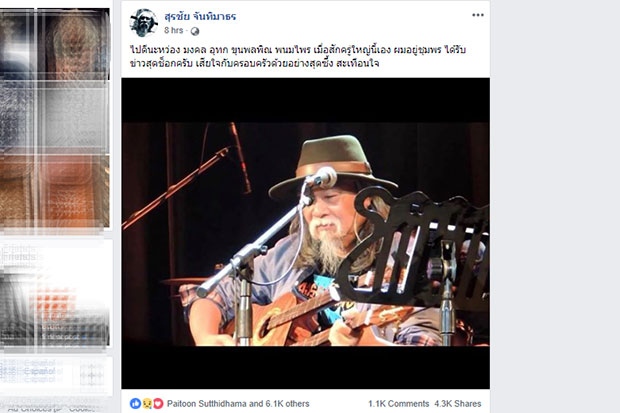