When Jay Fai, a 70-year-old street food seller in Bangkok known for her crab omelettes, won a Michelin star last year at the launch of the city's first restaurant guide, few locals were surprised.

"Auntie Fai" is as renowned for the ski goggles she wears to protect her eyes from hot oil splashing, as she is for her thick crab curry and dry congee that customers, including many who drive up in luxury cars, swear by.

But the afterglow from the global adulation was short-lived, as city officials soon resumed a drive to "return the pavement to pedestrians" evicting hundreds of vendors selling food, clothing and trinkets, for greater "order and hygiene".

Earlier this month, hundreds of hawkers marched to city hall following a daytime ban on vending on the sidewalks of Khao San road, a favourite haunt of backpackers.

What began as disparate protests by vendors facing marching orders has now morphed into an organised citywide movement that has also won support from academics and other public figures against the perceived heavy-handedness of officials. 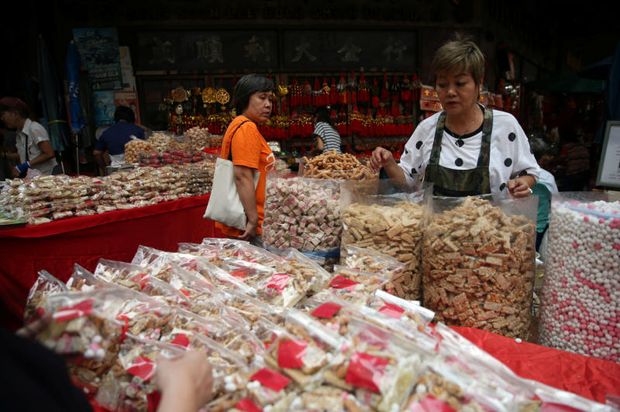 A woman sells foods on a street site in Chinatown in Bangkok, Feb 8, 2018. (Reuters file photo)

"Shepherding them into 'centres' or eradicating them completely leaves a huge hole in the city's ecosystem."

"This hole will inevitably be filled by big corporations" like food companies and department stores, she added.

The crackdown on street vendors is part of a wider effort by Thailand's military government, which came to power in a 2014 coup, to impose order in a city famous for its vibrant nightlife and cheap and varied street food.

Authorities are also removing shanties along the Chao Phraya River to build a promenade, and have forced out a community near an old fort to make way for a public park.

Civic groups say the evictions mostly target poor residents who have little legal recourse, as they have no formal rights.

"A war is being waged against the city's own people, the poorest and most vulnerable," said Poonsap Tulaphan, director of HomeNet Thailand, which supports informal workers.

"Many of these vendors have been selling in the same spot for decades, and rely on their earnings to support themselves and their families. Without that, they have nothing," she said.

Across Asia, governments keen to modernise booming cities increasingly view street vendors as a hindrance, and as usurpers of public spaces meant for formal businesses and wealthy residents.

But hawkers enhance the business environment, make localities more dynamic and walkable, and help deter crime by being the "eyes and ears" of the neighbourhood, said Narumol Nirathron, a professor at Bangkok's Thammasat University.

Ms Narumol's research showed that 87% of Bangkok's residents buy food or other items from street vendors.

Of the more than one-quarter of residents who buy from them every day, many earn less than 9,000 baht a month.

Of the vendors themselves, more than 70% are women, and more than two-thirds are over the age of 40 and have little education, making them particularly vulnerable, Narumol said.

The recent crackdown has hit them hard: licensed vendors are down by thousands, and tens of thousands more may be banned in 683 spots in the city, said Rewat Chobtham, president of the Network of Thai Vendors for Sustainable Development.

"This is the most devastating policy of the government," he said.

"The cancellation of licences and evictions have resulted in vendors losing their life savings, pulling their children out of school, and losing assets such as homes and vehicles," he said.

They are not alone.

Street vendors are facing animosity everywhere, as officials try to make their cities look like those in the United States or Europe, said Sarah Reed of Women in Informal Employment: Globalizing and Organizing (WIEGO), an advocacy group.

"Let's call it what it is: elitism and corporate gentrification," she told the Thomson Reuters Foundation.

"This is particularly misguided given that many of the cities they seek to emulate are now striving to attract vendors and street markets to create the kind of street life that Southeast Asian cities like Bangkok have in abundance."

Bangkok's street vendors, unlike the city's "motorbike taxis" who are also facing increasing restrictions, had not organised into a unified lobbying group before.

That changed following vendor evictions in 2016 and 2017. As group leaders from across the city met at forums and at government agencies, they began to chat and coordinate their actions via messenger apps, said Mr Rewat.

The Network of Thai Vendors for Sustainable Development, established in April, has more than 7,500 members from 25 districts of the city, he said.

They are being backed by academics and lawyers, who have asked Prime Minister Prayut Chan-o-cha to reconsider vending regulations.

In an open letter handed to the prime minister and to city officials earlier this month, the network demanded that those evicted be allowed to return to their old spots.

They also asked for formal recognition of their right to earn livelihoods, and to be allowed to participate in decision-making on vending.

"We will consider their requests seriously and decide on a course of action," said a government spokesman.

A new committee, with vendor representatives as well as officials from the Bangkok metropolitan authority and the traffic police, will be set up within 30 days, he said.

"We need a strategy that does not evict street vendors. Ending this crisis is urgent and critical," he said.