KHON KAEN: Three senior police officers at Provincial Police Region 4 have been dismissed from the civil service and 15 others transferred to inactive posts at Royal Thai Police headquarters in connection with a high-profile investigation into a Ponzi network.

The order expelling them from the force was signed on Monday by national police chief Chakthip Chaijinda and received and published at the Police Region 4 office in Khon Kaen on Tuesday morning.

The three allegedly colluded in fraud in connection with Pol Maj Gen Suthip’s alleged Ponzi network, in which 240 people suffered estimated total losses of more than 500 million baht. Among them were 196 police officers in Loei believed to have been swindled out of 240 million baht in total.

Pol Maj Gen Thanasak was previously in charge of the investigation into the Ponzi case.

The fraud allegedly began when Pol Maj Gen Suthip was Loei police chief and chairman of the provincial police cooperative.

He is accused of persuading local policemen to borrow from the cooperative to clear their debts with various creditors.

He also offered to manage the borrowed money and promised them monthly investment returns of about 5,000 baht.

The policemen believed him and transferred the money to Pol Maj Gen Suthip, who failed to pay either the promised returns or to clear their debts. 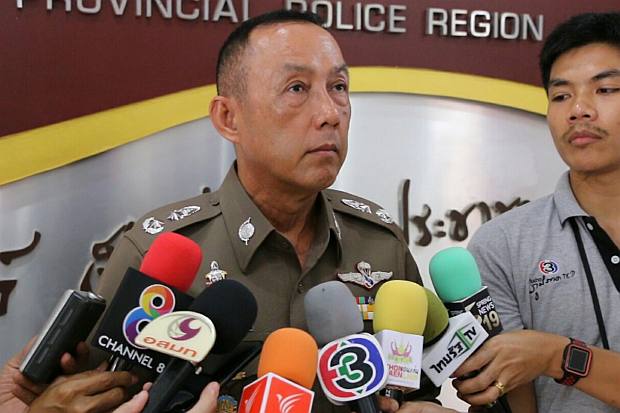 Pol Maj Gen Thanasak Ritthidetphaibun, deputy chief of the Provincial Police Region 4, speaks to reporters when he was in charge of the police investigation into the Ponzi network allegedly operated by the former Loei police chief. Pol Maj Gen Thanasak was abruptly transferred to an inactive post on Tuesday. (File photo by Chakkrapan Natnari)