A tourist swims at Hat Sai Noi beach in Hua Hin district of Prachuap Khiri Khan within the safe area set by the shark net. (Photo by Chaiwat Satyaem)

PRACHUAP KHIRI KHAN: Hua Hin authorities have finished installing a shark net off the beach where a Norwegian was attacked during his swim five months ago.

Jeerawat Phramanee of the Hua Hin Municipality Office said a company commissioned to install the net at Sai Noi beach at Ban Khao Tao finished the job on Thursday at a cost of 400,000 baht.

The net was erected at a depth of three meters covering a demarcated area of 50 by 310 metres from the shore. It was equipped with buoys to alert boats going into the area and blocks only big fish from coming close to the beach.

Hat Sai Noi in Hua Hin district is the first beach in the country where a shark net has been set up.

The demarcation of the safe swimming zone was mooted after Norwegian Werner Danielsen was bitten by a bull shark while he was swimming off the beach in April. A survey in the location later found more of them. 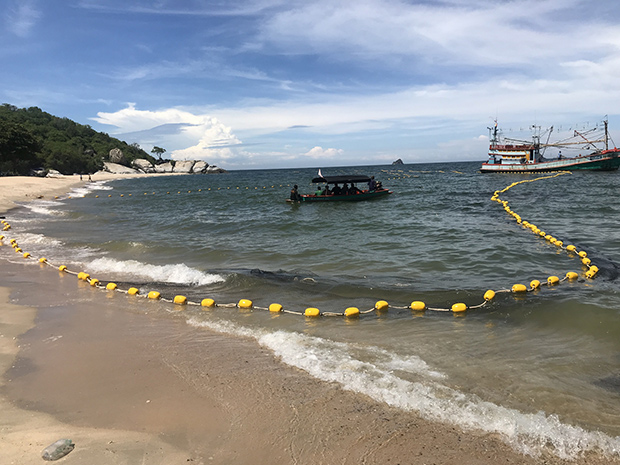 Officials drew a lesson from Australia which installed shark nets off its shorelines to protect swimmers.

Hat Sai Noi resident Boonsong Tempiem said tourists could now swim safely near the beach. She hoped the net would draw more beachgoers to her village to boost income.

Thanyamas Ketkaew, another villager, said the net would also save swimmers from poisonous jellyfish which sometimes hurt tourists on the beach.