The attempt to attack the Chinese tourist has added another worry for Prime Minister Prayut Chan-o-cha as his government tries to restore confidence in visitors from China following a fatal boat accident in Phuket.

Government spokesman Lt Gen Sansern Kaewkumnerd said on Sunday Gen Prayut had assigned the Tourism and Sports Ministry and other relevant agencies to quickly enact measures to build confidence for tourists from China after a video clip showed a security guard at Don Mueang airport trying to attack a Chinese tourist.

The quarrel took place on Thursday after the visitor was denied entry on the grounds that he could not show evidence that he would return to China after his trip to the kingdom. The apparent assault came after the tourist refused to enter a waiting room after he was denied entry. He later returned to China.

"Authorities at airports must control themselves and work in line with international standards. The airports are the first gateway to Thailand and those working there must be service-minded," the spokesman quoted him as saying.

The Transport Ministry, which oversees airports, and Royal Thai Police Office, which handles the immigration process, need to work harder to facilitate all foreign visitors, including the Chinese, the prime minister added.

The prime minister offered an apology for the incident and will do so again in a letter to the tourist to be handed to the Chinese embassy in Thailand, the spokesman added. The tourist's name was not revealed.

The latest incident came as Thailand is trying to contain damage to tourism after the fatal boat tragedy in July. The Phoenix sank off the Phuket coast, killing 47 Chinese tourists.

Chinese arrivals fell 12% month-on-month in August from 983,212 to 867,461, figures of the Tourism and Sports Ministry show. But the total number of tourists from China still grew 16% to 7.7 million from January to August over the same period a year earlier.

The prime minister was concerned that the attempted assault would exacerbate the declining confidence of Chinese people planning to come to Thailand, the spokesman said.

The security guard at Don Mueang was suspended from duty and Airports of Thailand Plc plans to terminate his employment. His name was not provided.

Don Meuang general manager Gp Cpt Suteerawat Suwnnawat and the airport security chief have been suspended from work for 30 days.

Thailand is the favourite overseas destination for the Chinese, although the country dropped to second - after Japan - this year in a Hotels.com survey on countries they feel the most welcome in. The survey was conducted before the boat tragedy in Phuket. 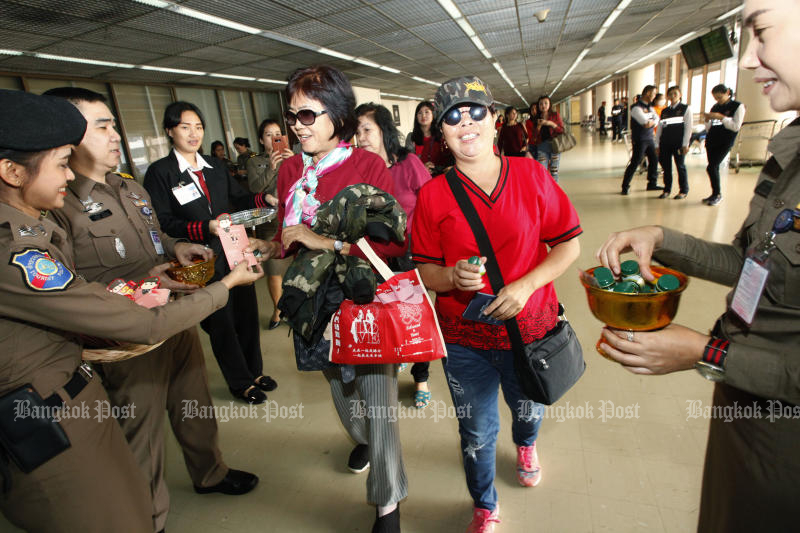 Visitors are greeted by Tourist Police officers as they arrive at Don Mueang airport on Sunday. (Photo by Pornprom Satrabhaya)

Malaysia's highest court said Tuesday it would hear former leader Najib Razak's final bid to overturn his 12-year jail sentence for corruption, with an acquittal potentially clearing the way for his return to power.

Thai banks' non-performing loans (NPLs) stood at 2.88% of total lending at the end of June, slightly down from 2.93% at the end of March, the Bank of Thailand (BoT) said on Tuesday.