Salvage workers at the spot where the tourist dive boat Phoenix rests after it capsized and sank off southern Phuket, dragging 47 Chinese tourists to their death, on July 5. (Photo Post Today)

The operation to raise the tour boat Phoenix has been suspended for a few days after a member of the salvage team died.

The vessel sank off the coast of Phuket in July, drowning 47 Chinese tourists.

Phuket public relations chief Bussaya Chaipiam said bad weather had caused conditions that led to the man's death. The operation would resume on Oct 4 or 5.

Niphat Kladnak, 37, of Spitz Tech Co, fell overboard around 12.30pm on Saturday. He was pulled unconscious from the water and rushed to Vachira Hospital in Phuket, where he was pronounced dead shortly after.

Niphat had been working at the stern of a vessel being used by the salvage firm.

A native of Chumphon, he had been involved in the salvage operation since it began in August. His body was returned to his home province for funeral rites at Wat Chonlathee Phrueksaram in Thung Tako district.

The Phoenix was carrying 89 tourists, most of them Chinese, and 12 crew when it sank in a storm off the Phuket coast on July 5. Forty-seven visitors from China lost their lives. It was one of the worst sea tragedies in modern Thai history. 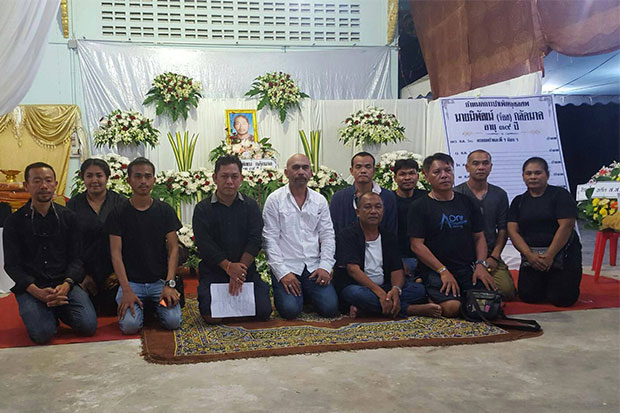 Relatives and friends attend funeral rites for Niphat Kladnak, 37, who died during the operation to salvage the tour boat Phoenix, which sank during a storm off the coast of Phuket in July. (Photo by Achadtaya Chuenniran)