Police take Sidney Michael Edward, 72, a British national, and his wife Phensakao Nasok, 45, of Mukdahan, to the room of another Brit in Pattaya, where cash and a large mattress were stolen (inset) while the tenant was on holiday. (Footage obtained via Chaiyot Pupattanapong)

PATTAYA: An Englishman and his Thai wife were left speechless when police showed them video footage of the husband carrying a stolen mattress from the room next door, where foreign currency worth about 126,000 baht was also reported missing.

Sidney Michael  Edward, 72,  and his wife Phensakao Nasok, 45, of Mukdahan province, were arrested at their rented room on Soi Liap Chai Hat 5 in Pattaya on Wednesday.

The arrests followed a complaint filed by a fellow Briton, identified only as Stephen, 66, on Sept 29. He told police he had returned from a holiday in Cambodia and discovered that his room door had been forced open.

Police examined the scene and viewed recordings made by a security camera in the corridor, which shed light on the burglary.

There were two robbers, who divided the task -  with the man forcing open the door and the woman acting as lookout, police said. The man was seen moving a large mattress out of the victim's room.

The arrested couple live in the room next door.

During police interrogation they kept denying the charges. But after being asked to view the video recording they had no choice but to confess to the theft charges, police said.

The couple told police they were in dire need of money, and they took the mattress to use on their own bed. They said they had not yet spent the stolen money. 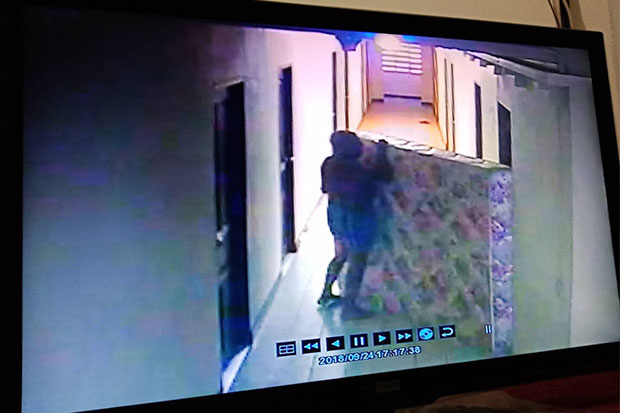 Security camera footage shows a man moving a big mattress from a room in an apartment building in Pattaya, Chon Buri. The couple living in the room next door, a British national and his Thai wife, have been charged with stealing the mattress and £3,000 from the room while the tenant, a fellow Brit, was holidaying in Cambodia. (Footage obtained via Chaiyot Pupattanapong)