One of the wasp combs are found at the Pu Suea Cave Meditation Centre in Wang Wiset district in Trang on Friday. (Photo by Methee Muangkaew)

TRANG: A woman died on Friday from wasp stings, three days after a four-year-old boy succumbed to his injuries, after hundreds of the insects descended on them during construction at a meditation centre.

Ladda Chongthep, 27, was pronounced dead at Trangruampat Hospital in Muang district after being treated in the intensive care unit since Monday. The child had died on Tuesday, following the wasp attack on Monday which also injured six other workers.

About a dozen workers, including Ladda, were building stairs and handrails at the Pu Suea Cave Meditation Centre in Wang Wiset district on Monday when the incident occurred.

Patipat Charoenwong, 36, the husband of Ladda, said on Friday that they were working outside the cave when a strong wind blew a wasp comb from a tree to the ground. Hundreds of the insects attacked the workers as they fled, he recalled, adding that Ladda was slow as she was carrying the boy during the escape.

The boy was stung by at least 50 wasps and died of an allergic reaction to the stings at the hospital.

Phra Aroon Thanawutto, who operates the meditation centre, said he planned to call a meeting of the monastery committee to discuss the best way to get rid of all the combs in the compound. 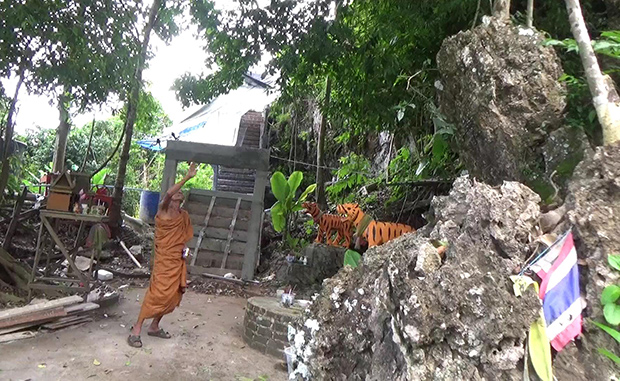 Phra Aroon Thanawutto shows the tree where a wasp comb dropped and hit workers on Monday. A woman and her son have since died from multiple stings. (Photo by Methee Muangkaew)