A love hotel in Nonthaburi has become the object of outraged comment for having a large portrait of Adolf Hitler in one of its rooms.

The London newspaper The Sun reported this week that Jewish groups and others were distressed to learn about the Love Villa Hotel.

The juxtaposition of Hitler and a Communist hammer and sickle suggest the decor choices were not made with malicious intent. But ignorance of history is no excuse, say critics.

“It shows a complete lack of knowledge and education about Hitler, the harm he causedand the horrifying crimes that he committed in World War II.

“This is a problem throughout Asia and unfortunately I’m not at all surprised by it. Frankly, the Thai government needs to be a lot more active in preventing this kind of thing and there’s no reason why they shouldn’t be.”

The hotel has a variety of other theme rooms such as Cowboy, Hollywood, India, Japan, Loveboat, Matrix, spider and war. The war room has replica guns above the bed.

Prices to use the Communist room start at 410 baht for two people for three hours.

The use of Nazi-themed images in Thailand is not new. One example that drew international attention in 2012  involved students dressing up in Nazi uniforms for an event at a Chiang Mai private school.

Two years ago, Silpakorn University apologised to the Israeli embassy after several of its students performed a cosplay in which Hitler was depicted at a freshmen-welcoming ceremony.

In June of this year, a French tourist complained to police about Nazi flags and other souvenirs with Hitler’s image being sold openly in Pattaya. 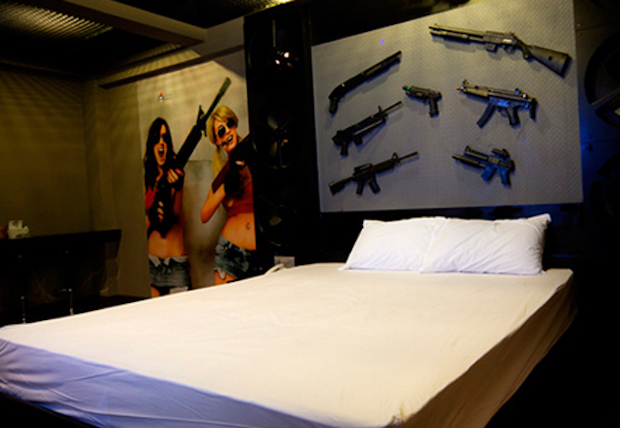 The War Rom at the Love Villa Hotel features replica guns above the bed. (Photo from Lovevillahotel.com)

The memory of the lack of available mental healthcare services that Dr Kanpassorn Suriyasangpetch received as a teen and dental student inspired her to launch Ooca, an app that helps people with mental illness.