Police returned to the condominium complex at the centre of last week's temple bell dispute on Monday and found tenants had rented rooms out to foreigners without informing immigration authorities.

Wat Phraya Krai police and immigration police went back to the Star View twin-towers on Rama III Road to check on foreign tenants staying in 12 units there.

The inspection followed a visit on Friday during the dispute involving a resident annoyed by the daily ringing of a tower bell in the early morning by neighbouring Wat Sai, which put the condo complex in the public limelight. The temple agreed to tone down the ringing as a compromise between religion and the complainant.

Immigration police on Friday found Lee Seung-Kun, 42, staying in a room. The 42-year-old Korean was facing seven charges of fraud involving 190 million won (6 million baht) when he fled his home country and came to Thailand six years ago. He had changed his address several times, but his run ended at Star View.

Mr Lee was charged with overstaying his visa and will be deported to Korea to answer to the authorities there. (continues below) 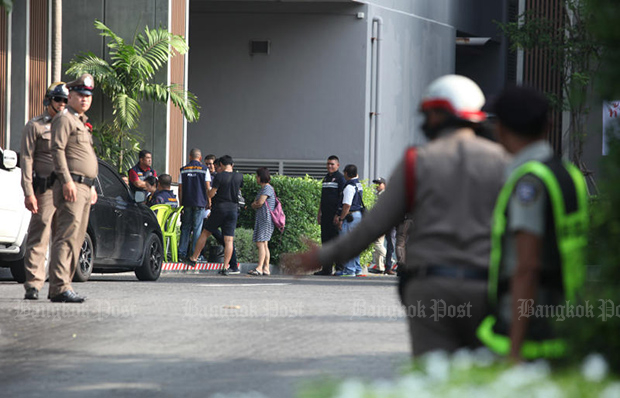 Police inside the Star View condo complex on Monday. (Photo by Pawat Laopaisarntaksin)

Immigration Bureau chief-designate Surachate Hakparn said the checks on Monday did not find any foreigners staying illegally in the country. Police did find the owners of 12 units had rented the rooms out to foreigners and failed to inform authorities they were staying there by filing a TM 30 form, as required.

Pol Maj Gen Surachate said all would be fined under the Immigration Act.

The law requires the owner of a house or hotel to inform immigration police of foreigners living in their premises in person, by phone or by mail. If there is no nearby immigration office, the owner must inform a police station.

A resident of Star View said police checked all vehicles moving out of the complex on Monday morning to ensure that any foreigners staying illegally could not escape.

Deputy Prime Minister Prawit Wongsuwon has a policy to root out all overstayers and illegal migrants within one month.

Defence Ministry spokesman Lt Gen Kongcheep Tantravanich said people in several communities in Bangkok and other provinces had lodged complaints about foreigners they suspected were conducting illegal activities or overstaying in the country.