An alleged scam selling 'fast track' visa handling for 200 baht is being treated as a possible bribe demand at the Visa On Arrival desk at Don Mueang airport. (Creative Commons, Flickr)

A police superintendent and three deputy chief inspectors at Don Mueang airport have been transferred as they face a probe in connection with a bribery allegation made against them, said Immigration Bureau (IB) acting commissioner Surachate Hakparn.

The four officers were incriminated after a complaint was made via Facebook recently. A Facebook user claimed a Chinese friend had queued for six hours at Don Mueang airport to obtain a visa on arrival.

The user alleged that the long wait was because of the fact that they refused to pay 200 baht to access a special "fast track channel" at the airport.

The Facebook user said the friend has since returned to China.

Pol Maj Gen Surachate said initial investigation has confirmed the allegation, which led to the transfers of the four senior officers to inactive posts.

"This is something we have warned [the officers] about before, Pol Maj Gen Surachate said. "It's like in sports. If one knows what the rules are and yet still violates them, they must be sidelined."

The acting commissioner added if the four officers realised they have done wrong and were willing to redeem themselves, they might be allowed back to their jobs, but if not, they would face the consequences.

He insisted airports must be free of any kickbacks and the IB will launch swift measures to deal with problems that have been "swept under the rug".

However, Pol Maj Gen Surachate said the priority now was to install more capable and decent officers to help streamline the IB.

The rules for Visa On Arrival are well publicised by the Immigration Bureau. 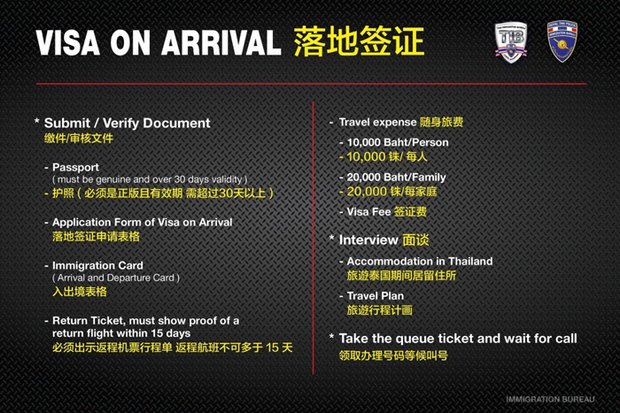 Also Monday, Defence Ministry spokesman Kongcheep Tantravanich said Deputy Prime Minister Prawit Wongsuwon, who is in charge of national security, has instructed authorities to ensure safety for tourists and stamp out transnational criminals who come to the country as foreign visitors.

Residents, including those in Bangkok, have taken notice of some foreign groups taking up residence in their communities and engaging in suspicious activities, according to Lt Gen Kongcheep.

The defence minister has ordered the IB to strictly enforce the law against foreign nationals overstaying their visas and those who remain in the country despite their visas having been revoked.

Authorities will also check on nationals who work in Thailand to see if they have the correct permits for the jobs they do.

Lt Gen Kongcheep added the foreign nationals identity database has to be integrated with the immigration screening facilities at border checkpoints and airports to help identify more quickly those who might pose as a threat to national security.

Meanwhile, Pol Maj Gen Surachate announced IB will begin to deport visa overstayers -- of which there are at least 40,000 -- within a month.

The police will also run checks on foreigners who are staying at rented accommodation to see if they have properly reported their places of stay to authorities.