The lower jaw of an animal found in the cooking area of the camping site used by the 12 suspected poachers in Sai Yok National Park in Kanchanaburi province.(Photo by Piyarach Chongcharoen)

KANCHANABURI: Wildlife remains have been found in the cooking area of the campsite used by suspected poachers, including a senior district official, detained as they were leaving Sai Yok National Park on Sunday.

Numerous spent bullet casings have also been found along the track travelled by the suspects' six off-road vehicles as they left the park.

The evidence appeared to contradict the suspects' claims that four severed paws from a binturong, or Asian bearcat, found in their possession had been purchased from villagers during a pilgrimage to a Buddhist monastery in the forest, assistant park chief Netnapha Ngamnet said on Tuesday.

She believed the spent ammunition had been discarded by the suspects, disposing of the evidence, before they were stopped and searched leaving the park, in Sai Yok district.

The search, carried out Monday, was led by Miss Netnapha and made by park officers, veterinarians, soldiers, police and members of the media.

In a forest area known as Pa Khao Thalu, about 1.2 kilometres from where the suspects were detained, 25 spent 9mm bullet casings and six spent .45 casings were found along the track they used to leave the park. They were tagged as evidence.

A plastic bag with blood stains was also found about seven metres from where two of the six cars were stopped for a search on Sunday.

At Tao Dam monastery, in the same forest zone, the searchers found the lower jaw of a wild animal, black fur in three nearby spots, and bones and animal innards in the cooking area of the campsite believed used by the suspects.

Cooking gear, including a chopping board, knives and pots, were also found there.

Evidence was collected and samples taken for further examination.

Twelve suspects, including Watcharachai Samirak, a deputy chief of Dan Makham Tia district in Kanchanaburi, were detained on Sunday in possession of a rifle fitted with a silencer, a pistol, ammunition and the four binturong paws, which weighed 920 grammes.

The binturong is a protected species under the Wildlife Protection Act.

Pol Col Thani Sanguanchin, chief of Sai Yok police station, said on Tuesday that initial questioning of the suspects had been completed. Some had admitted to some charges while denying others.

Police planned to take suspects to court on Tuesday afternoon to seek permission to further detain them. Police would oppose bail, he said.

Investigators would also invite Phanatchakon Phothibandit, chief of Sai Yok National Park, in for questioning, and he could formally file a complaint against the alleged poachers.

Department of National Parks, Wildlife and Plant Conservation spokesman Sompoj Maneerat on Monday voiced his concern that “insufficient evidence" might lead to all the suspects escaping the charges.

Some of the suspects testified that they bought the Asian bearcat paws from villagers along the way, and said that they were not poachers, he said.

It was quite challenging for investigators to determine whether the guns and ammunition, and the gear found at the campsite, were used to kill animals or not, he said.

Kanchanaburi governor Jeerakiat Phumsawat said on Monday that Mr Watcharachai had been dismissed from his position in Dan Makham Tia district, and two volunteers in the district had been suspended, pending further investigation. 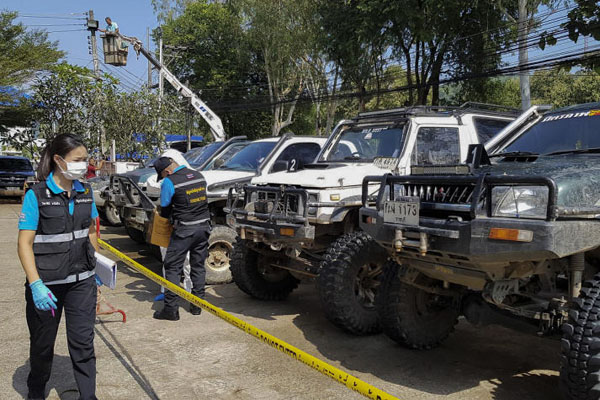