A police officer inspects the remains of a pickup truck that plunged from the top of a parking structure at the Food and Drug Administration compound on Wednesday. (Photo from @js100radio Twitter account)

A pickup truck plunged six floors down from the top of a parking structure in the Public Health Ministry compound, but the driver escaped serious injury.

Jor Sor 100 and Traffic Police radio stations reported the vehicle fell from the top floor of a parking structure next to the Food and Drug Administration in Muang district of Nonthaburi on Wednesday.

A video clip posted later on the @js100 Twitter account showed a man starting the engine of a pickup truck while standing next to the vehicle with one leg inside the driver's compartment. The truck suddenly lurches backwards before smashing through a low wall and careening over the edge of the building. The driver is able to step back from the moving vehicle before being swept over himself.

The driver was identified by Spring News as Jeerapat Weerachawattana.

He told Spring News that he had accidentally left the gearshift in the reverse position when he parked. He was able to get out of the way as the vehicle started to move, only sustaining a minor injury to his left hand.

It was unclear why Mr Jeerapat started the engine before he was seated in the vehicle. 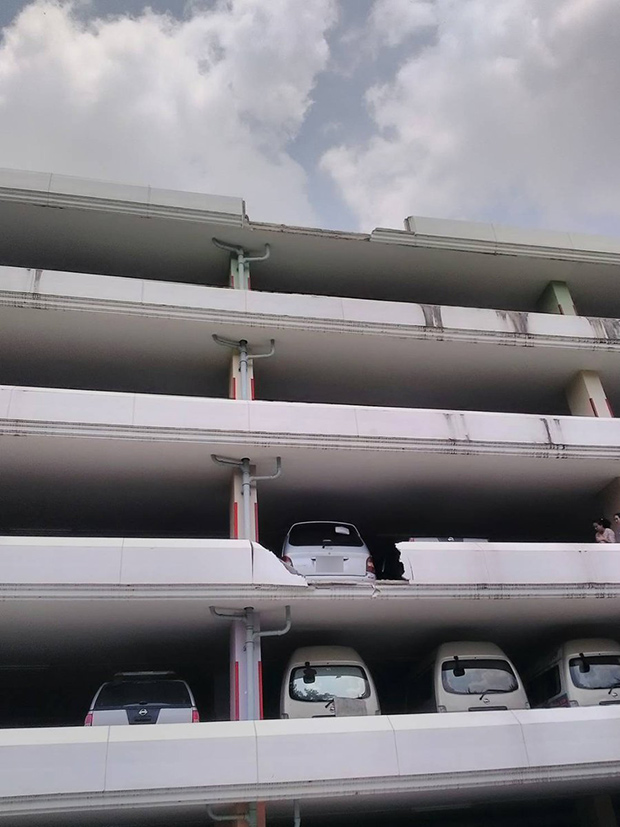 Damage is seen on the sixth and third floor of a parking structure after a pickup truck plunged to the ground on Wednesday. (Photo from @js100radio Twitter account)