Blockbuster drug haul worth over B2bn in Chiang Rai

Packs of illicit drugs seized in recent police operations are displayed at the Narcotics Suppression Bureau headquarters in Bangkok during a media conference on Monday. (Photo by Apichit Jinakul)

More than 20 million speed pills and 100kg of crystal methamphetamine -- worth over 2 billion baht -- have been seized and three alleged traffickers arrested in two major police operations in Chiang Rai province.

Part of the massive illicit drug haul seized between Oct 13 and 14 was displayed during a media briefing at the Narcotics Suppression Bureau headquarters in Bangkok on Monday. 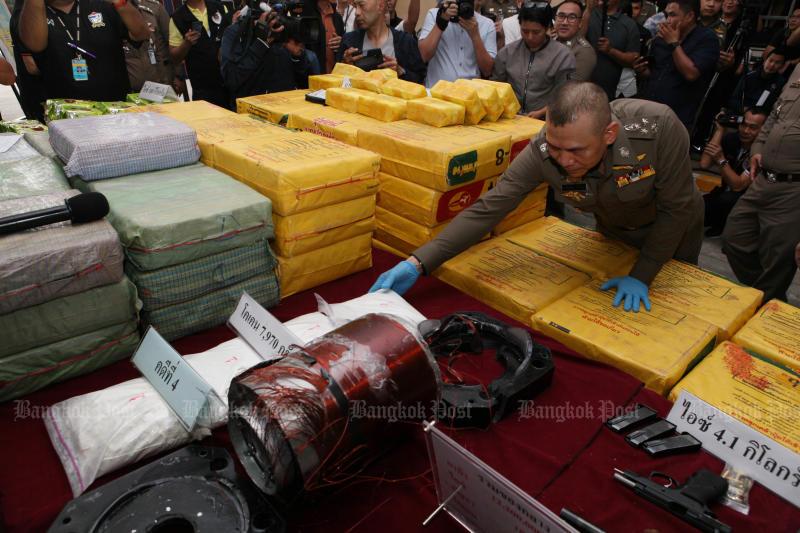 The gargantuan drug bust followed a tip that a drug trafficking gang would smuggle a large quantity of illicit drugs from Phaya Mengrai district to central Chiang Rai. Police teams were dispatched to keep watch along possible smuggling routes.

Mr Withoon and Mr Witthaya were apprehended at kilometre markers 1-2 on Thesaban Road in tambon Wiang of Chiang Khong district on Oct 13, while Mr Awichart was detained in tambon Sathan of the same district.

Thirty fertiliser sacks -- each containing 400,000 speed pills -- along with two sacks filled with a total of 100kg of crystal methamphetamine were seized from one of their three pickup trucks, said Pol Gen Chalermkiart. 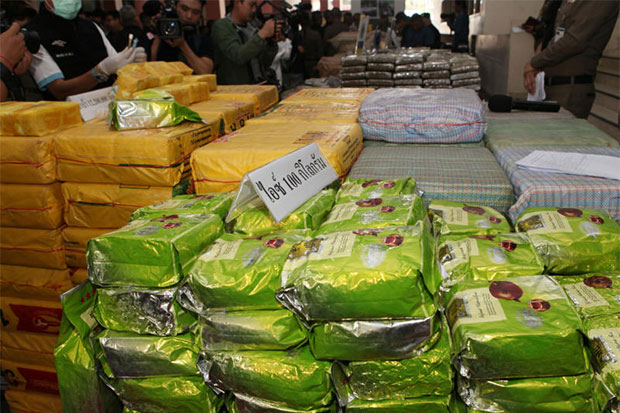 Packs of crystal methamphetamine, weighing 100kg in total, are displayed after their seizure in Chiang Rai. (Photo by Apichit Jinakul)

In another operation, a team of officers from the Provincial Police Region 5 seized 10 million speed pills abandoned in Mae Lao district of this northern border province by a drug gang following a police chase on Sunday.

Police manning a checkpoint on Thoeng-Chang Rai Road spotted a pickup truck travelling along the route at around 1am on Sunday. They signalled the vehicle to stop for a search, but the driver sped off. Officers gave chase, but the driver managed to escape.

At around 8am the same morning, police were notified by local residents that several fertiliser sacks were lying along the roadside in Ban Rongsala village of Mae Sao district. On arriving at the scene, officers discovered 10 million speed pills inside the sacks.

During the media conference, police also announced four other drug busts involving 1,800kg of marijuana, 7.9kg of cocaine, five weapons and other items seized from suspects.