Judges vote to oust member of the Judicial Commission

Suebpong Sripongkul (right), chief Judge of Region 2, hands the petition to secretary-general of the Office of the Judiciary, Sarawut Benjakul, at the Criminal Court in Bangkok on Aug 29. (Bangkok Post file photo)

Judges have voted in favour of impeaching a member of the Judicial Commission, Bankruptcy Court chief judge Chamnan Rawiwanpong, setting a precedent for the Courts of Justice.

The counting of votes for the impeachment of Mr Chamnan began at 9.24am on Friday. The count ended at 11.11am.

The sub-committee responsible received back 3,548 of 4,635 ballots sent to judges across the country. Of these 3,165 judges voted to impeach Mr Chamnan over his role as a member of the Judicial Commission, Courts of Justice spokesman Suriyan Hongwilai said. 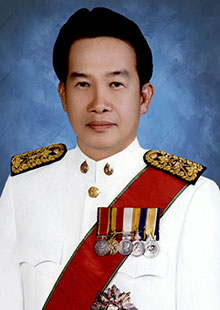 At least half of the total number of judges must vote in favour of impeachment, which is 2,318 votes.

As the majority of the judges voted in favour of  impeachment, Mr Chamnan must immediately cease all his duties as a member of the Judicial Commission, he said.

The impeachment was separate from Mr Chamna's duties at the Bankruptcy Court. He was still chief judge of the court, the spokesman said.

The impeachment move was led by Suebpong Sripongkul, the chief judge of Region 2, who earlier sent letters to every judge, requesting they formally respond by sending a copy of their identification card and a completed reply form if they supported the move.

Thai media reports that Mr Chamnan was accused of  abusing his authority as a judicial commissioner in the matter of an inheritence case handled by lower court judges at Chachoengsao Provincial Court. The case involved his wife's family.

The impeachment is allowed under Section 42 of the Regulations For Judicial Civil Servants Act (2000). It is the first time it has been done.

Thai media reports that Mr Chamnan, 64, has exercised his right under the law to file a defamation suit against those involved in seeking his impeachment.

The Judicial Commission comprises commissioners elected from judges at all levels of the Courts of Justice. It deals with the appointment, transfer, promotion and discipline of judges.

The others are the Judicial Administration Commission and the Commission for Judicial Service, which have separate responsibilities.