A Lebanese tourist, 29, sustains a knife wound following a violent brawl with two Thai men in Pattaya, Chon Buri, in the early hours of Saturday. (Photo by Chaiyot Pupattanapong)

CHON BURI: A Lebanese tourist was wounded in a knife attack involving two Thai men during a brawl over his alleged refusal to apologise to them over a hit-and-run motorcycle crash in Pattaya early Saturday.

The knife attack occurred on Soi Lengki intersection in Pattaya Klang, Bang Lamung district, at around 2.30am.

Pattaya police rushing to the scene found a tourist, identified later as Mohamad el Wazzi, 29, a Lebanese national, with a knife wound below his left chest. The officers took him to Pattaya City Hospital. 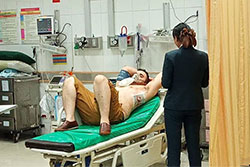 Witnesses told police that the tourist was buying goods at a FamilyMart convenience store when two men on a motorcycle arrived and entered the outlet. They loudly accused the Lebanese man of hitting them while riding a motorcycle and fleeing without offering an apology.

A quarrel quickly escalated into a brawl, said the witnesses. One of the two Thai men then pulled out a knife and stabbed the foreigner. They then fled on their motorcycle.

Police examined footage of closed-circuit television cameras in the area and along the escape route to find the two attackers. They would later interrogate the injured tourist.