The youngest son of King Power's owner, Vichai Srivaddhanaprabha, issued a heartfelt message of thanks late Wednesday for the cascade of condolences that followed his father's death in a helicopter crash.

In the first public reaction from his devastated family, his 32-year-old son Aiyawatt - better known by his nickname 'Top' - thanked people for the messages of support from across the world.

"I'm extremely proud to have such an extraordinary father," he said in an Instagram post shared by King Power's press office.

"I'm touched by how many people kept him close to their hearts."

Vichai, 60, was Thailand's fifth-richest man when he died in the horror crash after watching his beloved Leicester City play on Saturday.

He made billions from the King Power duty-free monopoly in Thailand, using the cash to invest in hotels, horses, and then bought Leicester's once unremarkable football club. 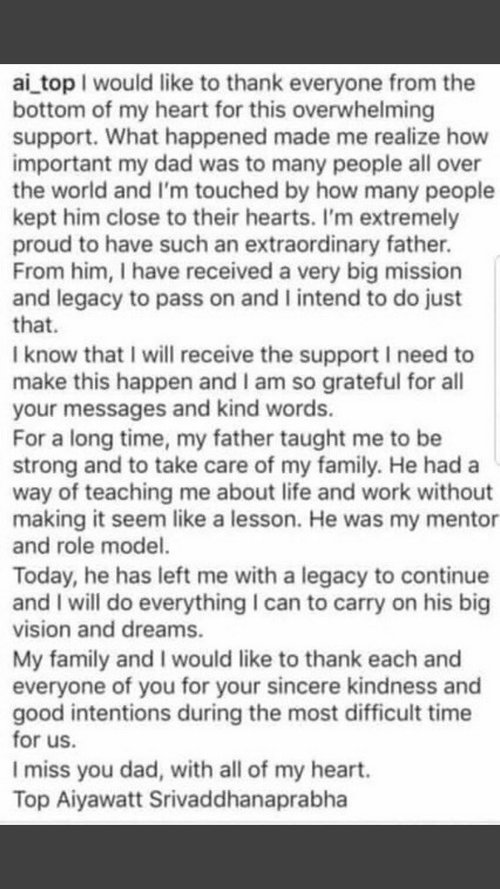 Vichai leaves behind a wife and four children - two sons and two daughters. All five are on the executive board of King Power.

But Top - already vice-chairman of Leicester - appeared to confirm he has been anointed to lead at least parts of the King Power empire.

"He (Vichai) has left me with a legacy to continue and I will do everything I can to carry on his big vision and dreams," the post said.

"From him I have received a very big mission and legacy to pass on... and I intend to do just that."

The post was accompanied by several photos of the pair embracing, one with Top kissing his father on the cheek and another cheekily presenting a polo trophy to his father. Both shared a love for the equestrian sport.

Over three decades Vichai chiselled out a shopping empire now worth some $4.9 billion (about 162.4 billion baht), according to Forbes, with his initial success owing less to family wealth than a knack for winning - and then keeping - the favour of the Thai elite, gatekeepers to the kingdom's wealth.

That included the monarchy, in honour of whom he named his company. The late King Bhumibol Adulyadej graciously bestowed him with his surname that translates roughly as as "auspicious and prosperous light".

It is likely to face a serious challenge to its monopoly on duty-free at Thailand's main international airports when its licence comes up for review and a duty-free auction in December.

Its concession for Bangkok's biggest airport is due to expire in 2020, potentially opening up the company to competition for the first time 14 years.

Top and his mother, Vichai's wife Aimon, paid a tearful visit to the King Power stadium this week, laying a wreath in the centre of the pitch and hugging club executives and players - with Jamie Vardy and Kasper Schmeichel among those most visibly moved.

The pair were fulcrums of Leicester's 2016 title-winning side, one of sport's most unlikely underdog victories dynamised by Vichai's massive investment and shrewd decision-making.