A surveillance camera recording shows a car being transported by a tow truck illegally changing lanes on a road in Bang Khunthian district of Bangkok. The car owner was issued the ticket.(Photo taken from May Karunyalert Facebook page)

A sharp-eyed traffic cop ticketed a car illegally changing lanes - while on the back of a tow truck - and the owner was a bit upset over the 500 baht fine.

The upset woman posted photos showing what happened on social media after she received the ticket in the mail, asking why she should have to pay the fine. Netizens quickly piled criticism and ridicule on the police.

It showed a tow truck transporting a Toyota car with Bangkok licence plates illegally changing lanes at a bridge over Kamnan Maen intersection on Kalapreuk Road in Bang Khunthian district, Bangkok, at 11.38am on Oct 1.

The officer mistakenly issued the ticket to Phakhawan Karunyalert, the owner of the car on the back of the truck, Pol Col Kritsana said.

It was the tow truck that broke the law, not Ms Phakkhawan’s vehicle, the deputy spokesman said.

Police had contacted the woman on Oct 31 and told her the wrongly-issued ticket had been cancelled.

The officer who issued it had been ordered to submit a report to his superiors and was being investigated, Pol Col Kritsana said.

Facebook user May Karunyalert posted on her page on Oct 31 that “Evidence is very, very firm….cannot get off the hook. Am I wrong?  Please tell me, brothers. I have to pay a 500-baht fine, don't I?  (three emoticon stickers) Thank you law enforcers for bringing me a smile today (one emoticon sticker).”

She later updated her post, adding that she had since been contacted by the officer who issued the ticket and she did not need to pay the fine.

Her original post was suddenly deleted on Thursday evening. 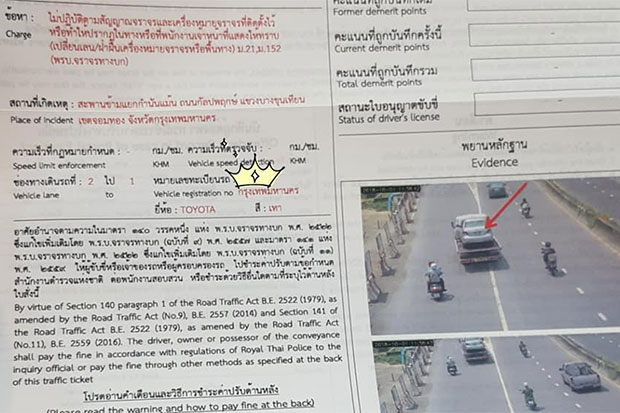 The ticket issued to the woman motorist whose car was on the back of a tow truck. (Photo taken from May Karunyalert Facebook page)