The government is setting out on an ambitious plan to turn the country into the global hub for startups through legal upgrades and easier access to funds, Prime Minister Prayut Chan-o-cha said.

Gen Prayut was speaking at Government House Thursday to an invited crowd of 500 people involved in startup businesses who met him to propose ideas about what the government could do to support them.

"The government has set a target so we can be the global hub of startups," said Gen Prayut, adding the international community has praised Thailand's potential.

"Thailand would serve as a platform where startups from around the world would come to Asia." He didn't say when he hoped to bring it about.

He said he wants Thailand to become a startup-based country, where researchers and new business operators are drawn in to boost innovation.

Responding to the startups' requests he said, efforts must be made to amend laws in regard to startup businesses and ensure convenient access to financial resources.

The government procurement process must be done in a way that supports startups to play a part in the country's development, he said.

"The government wants startups to become the new economic warriors of the country," Gen Prayut said. 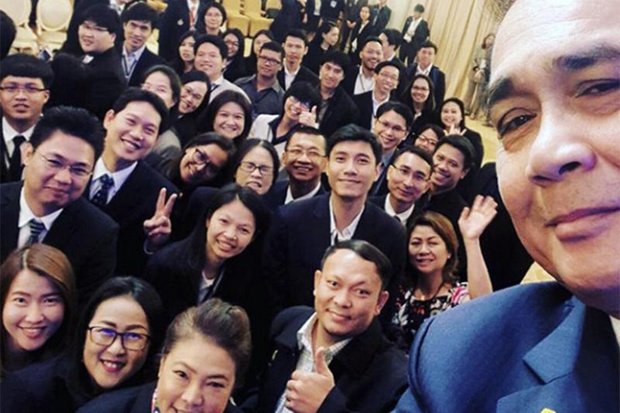 After the talk, the main issue was selfies, with the prime minister even grabbing one of his own. (Instagram/prayutofficial)

He explained that the administration realises startups would play a role in boosting the business sector and tackling various social problems.

Startups can also be venues where the younger generations can use their creativity and innovation to spearhead their businesses in the future.

He stressed startups would also help drive up the country's economy.

He noted about six billion baht has been poured into Thai startups by investors, while a Corporate Venture Capital (CVC) fund, worth 50 billion baht, was formed to provide the financial support for the businesses.

Patai Padungtin, CEO and co-founder of Builkone Group, said he hoped to see changes now that Thai startups had a chance to meet the PM, who has the power to issue orders and coordinate related ministries.

He highlighted the ease of improving business, which requires a legal amendment, and creating a bigger market for Thai startups.

"Regulations on government procurement must be changed to accommodate startups. Even if they draw up TOR [Terms of Reference] used in government contracts, we would rather come up with more innovative ways to do the work. This could yield even better results than what is expected in the TOR," he said.

He also suggested the government could announce the budget and expected results, then allow startups to compete.

"Moreover, Thailand should expand the market to CLMV [Cambodia, Laos, Myanmanr and Vietnam]. I have friends from China or Silicon Valley and they turned to Indonesia, not Thailand, as it has a population of over 250 million people," Mr Patai said.

"Thailand and CLMV together can make a market out of that number," he said.

He added Thailand should exploit its good relations with neighbouring countries.

According to Gen Prayut, the government is preparing a plan for the second phase of startup development between 2019-2021, expecting a 5% boost to GDP and creation of 50,000 jobs with an increase of 1,000 innovation-led startups.

He said the government will support startups that use advanced technology and provide effective services.

Efforts will be made to draw more capital into startups with incentives provided to both domestic and foreign investors, as well as to internationalise Thai startups through cooperation with various countries.

The prime minister said foreign startups willing to run their businesses in Thailand could be supported by a visa incentive, called the "Smart Visa" incentive for foreign startups and co-working spaces in Bangkok and Chiang Mai.

Meanwhile, a startup bill is being drafted to define clear boundaries for organisations that would be responsible for startups, he said.