The World Health Organization has certified the Government Pharmaceutical Organization's antiretroviral drug Efavirenz, and the GPO is now looking to overseas sales.

GPO chairman Sopon Mekthon said on Friday that Efavirenz is the first drug developed in Thailand and Asean to pass the WHO Prequalification Programme and be included in the WHO's prequalified list.

Consequently, international health organisations such as the Global Fund and Unicef can order the medication for use in underdeveloped countries, he said.

The WHO certified it in August.

Efavirenz is the medication prescribed to all HIV-infected people when they are first diagnosed with the virus, Dr Sopon said.

Mukdavan Prakobvaitayakit, deputy managing director of the GPO, said the organisation had taken 16 years to develop the drug, which has the same properties as the prototype medication. The antiretroviral agent had passed the WHO's meticulous examination.

After the WHO's certification, many countries asked the GPO to register the medication there so they could order it, Ms Mukdavan said.

She cited the Philippines and Caribbean countries as examples. The Philippines planned to order about 300,000 bottles at a cost of 51 million baht, she said.

The GPO would produce 42 million Efavirenz tablets this year. This amount accounted for only 2.5% of the total capacity of the GPO, she said. 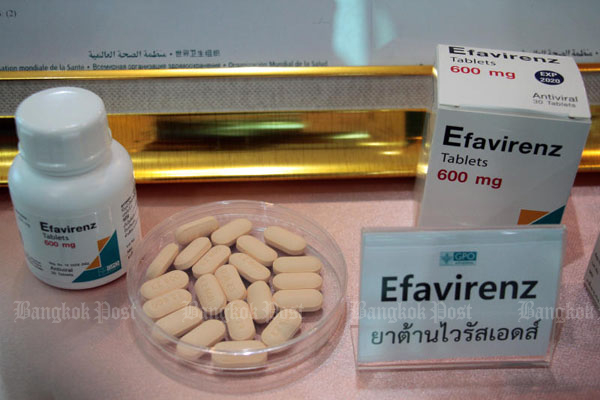