Girl dies of measles as outbreak spreads in deep South

A nurse gives a girl a measles vaccine shot in Narathiwat province on Friday to contain the spread of the disease. (Photo by Waedao Harai)

PATTANI: A nine-month-old girl has died of measles, raising the death toll from the disease in the southern border provinces to more than a dozen.

Pattani Hospital reported the baby girl died of measles and pneumonia on Saturday. She had been admitted to Yarang Hospital in Yarang district on Saturday and was later sent to the main provincial hospital because of her serious condition.

The girl was not given measles vaccine because she was already ill with the disease when she met doctors for the vaccination, the hospital said.

A baby needs two shots of measles vaccine, one at nine months old and another at two years and six months old.

The latest case raised the total number of measles victims to at least 13 in the region, 10 of them in Yala and three in Pattani provinces.

Yala has 890 measles patients, followed by 445 in Pattani and 79 in Narathiwat.

Doctors are rushing to finish vaccinating all children in the southernmost provinces after the outbreak began in the border region in June. They expect the outbreak to be contained after all boys and girls receive vaccine shots. 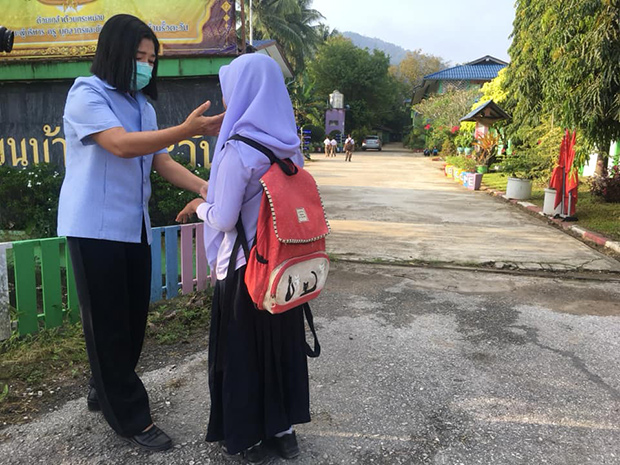 A public health official speaks to a student at Ban Rua Tawan School in Muang district of Yala province on Thursday as classes resume after a mid-year break. (Photo by Maluding Tido)

Chaiwat Pattanapisalsak of the provincial health office in Yala on Monday warned about complications such as pneumonia that could affect measles patients, the Public Relations Department reported.

The Disease Control Department has posted a message on its website advising all parents to have their babies vaccinated to prevent the disease.

The southernmost provinces are hardest hit largely due to a belief preached by some local Islamic teachers that vaccine is not permissible under the religion - despite the fact that the Chularatchamontree has said vaccination does not run against Islamic principles.