The newly built rail tracks of the extended Southern Green Line linking Samut Prakan to inner areas of Bangkok. The 13km stretch is scheduled to open next month. (File Photo by Somchai Poomlard)

The 13km extension of the BTS elevated railway linking southern Bangkok with Samut Prakan will open next month, and travel on that stretch will be free for the first four months, Prime Minister Prayut Chan-o-cha said on Monday.

Gen Prayut said the fare waiver on the newly completed extension between Samrong station and Samut Prakan had previously been set for three months.

The extended route, known as the Southern Green Line, has nine stations in all, but Soi Bearing-Samrong link has been operational since April last year.

The opening of the remaining eight stations next month will enable commuters to avoid crowded Sukhumvit road on their way to inner Bangkok.

The prime minister was speaking during the opening of the Ratchayothin vehicle underpass, which was built to improve traffic flow on Ratchadaphisek, Phahon Yothin and Vibhavadi Rangsit roads, among the capital’s busiest, during the construction of new mass transit projects across the city.

The underpass opened three months earlier than scheduled and can accommodate about 200,000 vehicles a day. 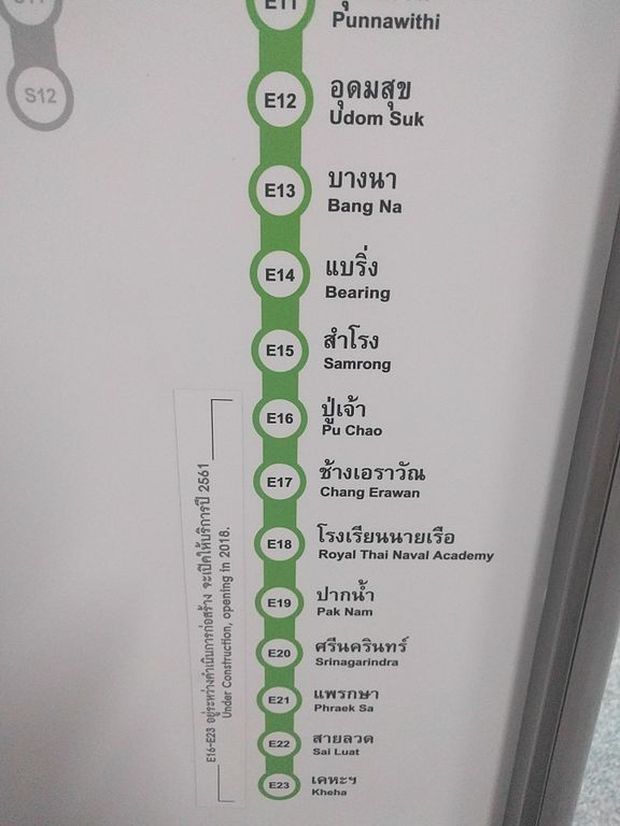 A map showing the stations on the Southern Light Green Line (E15-E23). (Photo by Wikimedia/Matthewmayer)

PHUKET: Phuket international airport was closed twice on Sunday for repairs to a damaged runway, delaying the landing and taking off of 16 flights, provincial governor Narong Woonciew said.

The Organization of Islamic Cooperation (OIC) pledged to play a role in rebuilding peace in the deep South and improving the quality of life for residents of the restive region during a visit last week.