Prime Minister Prayut Chan-o-cha, who chairs the committee, had approved the addition, Kanit Sangsubhan, secretary-general of the EEC Office, said on Friday. 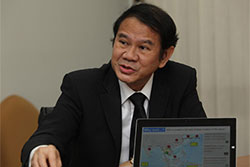 The addition will bring the total to 12.

The committee also approved a strategic cooperation framework for related agencies to integrate their efforts to push for the EEC, and the Budget Bureau would allocate 14.86 billion baht under the fiscal 2019 fiscal draft bill to 14 ministries involved, Thai media reported.

The EEC is the government’s flagship policy to create special economic zones spanning 30,000 rai in the three eastern provinces of Chon Buri, Rayong and Chachoengsao.