Traffic project tipped to cause chaos

Concerns among locals about route diversion damaging port and local trade for the next 900 days, writes Supoj Wancharoen

The 900-day construction of three overpass projects over Na Ranong intersection is expected to trigger critical traffic woes around the area with motorists being advised to avoid the route.

Thanu Tharakhate, of Construction Supervision Division under City Hall's Department of Public Works (DPW), said the Bangkok Metropolitan Administration (BMA) is in the process of publicising details of the project.

"We are also seeking cooperation from motorists to avoid the route while construction is under way," Mr Thanu said.

The construction, which began last Friday, is planned to conclude in March 2021.

The project is planned to enhance the traffic flow on Ratchadaphisek ring road, Mr Thanu said.

Although the ring road is present, traffic jams are not uncommon around the route's intersections.

The overpasses, he said, could be a solution to help address traffic jams at Na Ranong intersection and nearby areas. 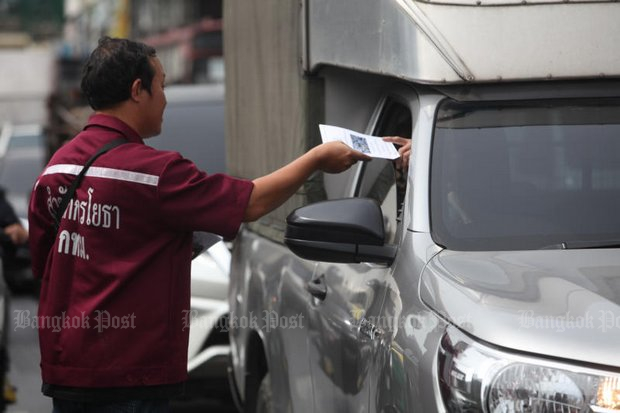 The lengthy construction sparked fears of traffic mayhem among motorists.

Meanwhile, Sacred Heart Convent School, located near the intersection, has urged students and their parents to prepare themselves for the inconvenience that could happen over the next couple of years due to the work.

"We would like to encourage everyone to consider these difficulties," the school said in a statement.

The school said it was informed by a constructor that nearby roads will be partially closed from today.

Boonthip Jia, a resident in the area, said she expects traffic mayhem because alternative routes in that area are just small roads and sois.

"The real affected group is cargo trucks that need to take this route to the Klong Toey Port," she said.

"Cargo delivery will be affected by the traffic diversion. 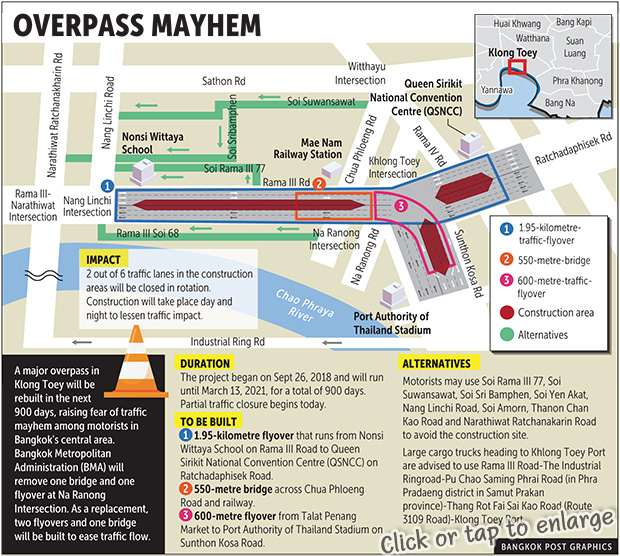 Under the traffic diversion plan, cargo trucks and lorries are advised to take a detour route to Samut Prakan province to get to Klong Toey Port.

The construction work will be handled by Sahakarn Wisavakorn, at a cost of 1.34 billion baht.

Under the project, the existing flyover that connects Queen Sirikit National Convention Centre on Ratchadaphisek Road with Bangkok's popular Penang Market will be torn down and rebuilt with a much longer length and height.

Another new overpass will be a 1.95-kilometre flyover, 15 metres above the ground. It will have four lanes.

The contractor also needs to remove the old overpass across Chua Phloeng Road to build a third one, 550 metres in length.

To speed up traffic flow to Klong Toey Port, the new 600m overpass will be built across Na Ranong intersection.

Mr Thanu said the construction will be carried out during the day and night.

He said the construction work will take 900 days because the BMA needed to reduce traffic impact.

"We cannot close all traffic," he said. "We need to work bit by bit to reduce impact. So, it takes longer."

The BMA also needs to work with utility operators to deal with electricity poles and wires located in the construction areas, he said.

He said extreme caution needs to be exercised during construction to aleviate potential problems for motorists and trade.