SINGAPORE: Prime Minister Prayut Chan-o-cha on Thursday introduced "Advancing Partnership for Sustainability" as the official theme for the Asean chairmanship next year.

Gen Prayut made the announcement at the handover ceremony after the conclusion of the 33rd Asean Summit and related summits held in Singapore, attended by leaders from 18 countries who are also members of the East Asia Summit (EAS) -- which includes 10 Asean members, and its dialogue partners, Russia and the United States.

Thailand assumes the chairmanship on Jan 1 next year.

Gen Prayut said Asean has grown into the sixth largest economic zone in the world and is projected to become the world's fourth-largest by 2030.

Thailand's role as a regional architect of Asean has been recognised. However, Asean is facing a number of challenges, such as trade and political competition, disruptive technologies, transnational crime, inequities, and changes in the region's social structure, he said.

Therefore, all 10 countries must cooperate closely, on the foundation of Asean unity and the principle of mutual trust, mutual respect, and mutual benefit, to create concrete deliverables and sustainability for Asean in all dimensions.

Gen Prayut then spoke in detail about next year's theme.

For "advancing", Asean will make use of technological advances from the 4th Industrial Revolution to move forward together dynamically and enhance competitiveness. Asean will also build immunities from disruptive technologies and future challenges, especially for Micro, Small, and Medium Enterprises (MSMEs), to advance towards a "Digital Asean", he said.

For "partnership" -- between Asean, Dialogue Partners, and the international community, there will be a focus on the "Asean Plus One" concept, reinforcement of Asean-centred regional architecture, and consideration given to measures that bring an appropriate balance of benefits to the people. Subsequently, this will increase economic cooperation with all countries and enhance the role of Asean on the international stage in addressing global issues such as climate change. 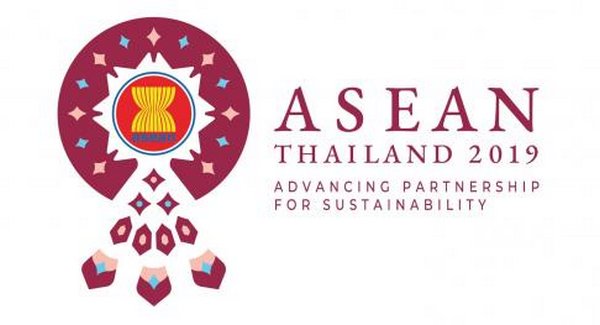 At Thursday's summit, Thai officials showed off the logo and Official Slogan of the Association of Southeast Asian Nations 2019.

In strengthening Asean's various partnerships, one of the important drivers is promotion of connectivity, including infrastructure, rules and regulations, and people-to-people links. The latter is especially important in the context of the Asean Year of Culture 2019.

"We wish to build sustainability in all dimensions, whether it be sustainable security or sustainable economic growth, which includes the green economy and sustainable development," he said.

"Thailand will continue the good work on those issues to which Asean has given priority over the past year, especially the Asean Smart Cities Network. This is to help ensure continuity and sustainability for the Asean Community," Gen Prayut said.

Sharing her perspective on Thailand's role as Asean chair, Kaewkamol Pitakdumrongkit, deputy head and assistant professor at the Centre for Multilateralism Studies, S Rajaratnam School of International Studies (RSIS), Singapore, said she expects Thailand to play a role in managing the South China Sea issue to maintain peace and stability in the region, and in ensuring that the Indo-Pacific policies pushed forward by several nations have synergies with Asean agendas including AEC 2025.

There is also an expectation to see the creation of the Asean Centre for Sustainable Development Studies and Dialogue, she said.

"This is important as the centre will be a discussion platform for Asean and other countries to talk about sustainable development, and for Asean to enhance synergies among the stakeholders' projects, maintain Asean Centrality, and implement SD that aligns with UN Sustainable Development Goal 2030," she said

Re-capping achievements over the past year with the theme of "resilience and innovation", Singapore PM Lee Hsien Loong hailed the establishment of the Asean Smart Cities Network.

He said he was happy with the progress in the Regional Comprehensive Economic Partnership to the point that it can be finalised next year, as well as progress in drafting the code of conduct in the territorial dispute in the South China Sea.

Mr Pence also reiterated the US stance on its Indo-Pacific policy.

"We all agree that empire and aggression have no place in the Indo-Pacific," Mr Pence said in opening remarks.