Women urged to speak up on abuses
Thailand
General

Women urged to speak up on abuses

Supermodel Cindy Bishop and friends held a rally and handed out literature to women, urging them to cast off 'cultural practices' that keep violence and sexual assault secret. (Photos by Tawatchai Kemgumnerd)

A campaign in Bangkok on Thursday urged Thai women to overcome cultural practices that make them susceptible to acts of violence and sexual assault.

Such practices, as seen through soap operas and broadcast programmes that glorify violence, instil a sense of submissiveness among many women, according to a campaign organised by the Women and Men Progressive Movement Foundation at the Victory Monument.

One of the high-profile speakers at the activity, supermodel Sirinya "Cindy" Bishop said women may be "upset but they must not give in", referring to the foundation's slogan designed to give women a positive outlook on life.

Some women have been taught to tolerate violence for the sake of keeping the family together, which is not true, said Sirinya.

Once women give in, she and her family would be trapped in a cycle of violence. They have to fight to prevent violence from recurring, she said.

The survey also showed the majority of respondents thought it was "acceptable" to watch an actress being "raped" by a lead actor, said foundation campaigner Chari Sisawat.

The majority of respondents (89.2%) said they often hear an analogy that likens husbands and wives to tongues and teeth, which implies quarrels between a couple are normal, according to Ms Chari.

About 77% of respondents said they knew the saying of kwam nai ya nam ok, which means family issues must be kept a secret.

Ms Chari said that belief in these sayings may prevent victims of violence from getting the help they need. 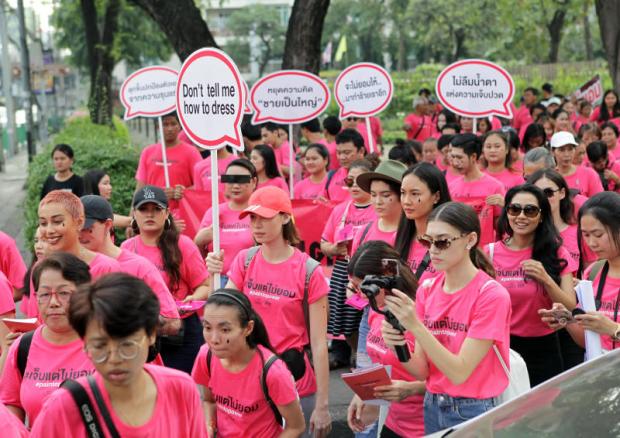 Women joined the campaign to call for an end to sexual violence and inequality. The rally was held near Victory Monument in Bangkok amid a fresh campaign launched by the Women and Men Progressive Movement Foundation to break some questionable Thai traditions.

A participant in the campaign, who declined to be named, said her 13-year-old daughter was sexually harassed by her husband. When she reported the crime to the police, her neighbour advised her against it.

"They said if the issue is out in the open, my daughter will lose face," she said.

When she finally filed the complaint, the police tried to persuade her to change her mind, saying it was a family issue.

The police took up the case only after she insisted on pressing charges.