Migrant kids get chance to blossom

Time for classes, and children of migrant workers head up-river to their makeshift school in Mae Sot district of Tak province. (Photos via YouTube/TruePlookPanyaCSR)

Three years ago, Chit Ko, a son of ethnic migrant workers, almost had to drop out of school, after his parents asked their son to start working to support the family.

If they had not changed their minds, the 11-year-old Chit Ko would have ended up like his parents, working a backbreaking job to earn a pittance.

The boy would not have had a chance to complete even a basic education, a sad destiny for Chit Ko, who was already an ace student in his class.

At the call to class, students head into the school at the Migrant Learning Centre.

Khamar Chain is headmistress of Sauch Kha Hong Sar learning centre in Mae Sot of Tak. It is one of about 60 Migrant Learning Centres (MLCs) across the country.

His parents were hesitant. Both knew that education is a passport to escaping poverty and deprivation. But how could they think of education when they struggled just to put food on the table?

"How can we send our children to school if we ourselves are still struggling to live?" his father asked the headmistress.

"If Chit Ko continues on this path, his life will end up like yours,'' said Khamar Chain. "I will help cover all his school expenses and I can guarantee that he will perform. Please trust me," she said.

His parents eventually decided to put their trust in the headmistress. They could not bear the idea of their beloved son ending up just like them.

His parents made the right decision. Three years later, Chit Ko is a success story of "Mobile Literacy for Out-of-School Children in Thailand", a collaboration between Unesco Bangkok and private tech and telecom companies including Microsoft, True Corporation, CP Group, the Help without Frontiers Foundation and the Ministry of Education.

Started in 2014, the project has helped improve the education of marginalised children along the Thai-Myanmar border through mobile learning and information and communication technology devices (ICT).

Under the project, 700 tablets preloaded with the application "LearnBig" which contains over 1,000 materials in three languages (Thai, Burmese and Karen) were provided to 60 migrant learning centres across Thailand.

To date, over 5,500 children, including Chit Ko, have enhanced their basic literacy and numeracy skills by more than 50% under the project.

Teachers at MLCs received the training on how to use satellite TV and the internet to conduct online courses. 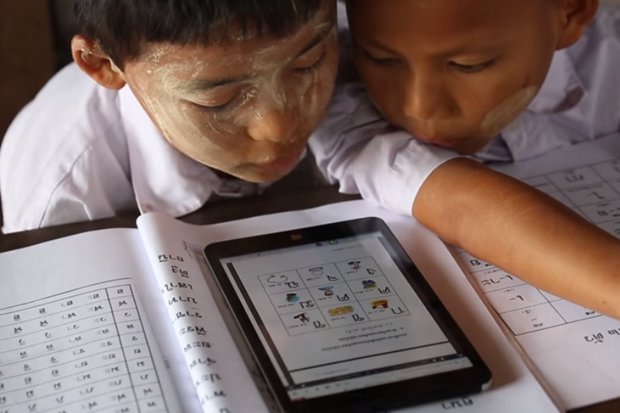 Students are exposed to technology via tablet devices used in classroom activities.

"We used to have only a whiteboard and students didn't have much fun learning. Now that we have the tablets and TV, kids want to come to school. They are happy when teachers use the tablets and they can watch documentaries or cartoons after class on TV," she said.

"When we use ICT devices, the students get excited. They have so many questions about the lessons. They even read ahead in textbooks by themselves."

According to Unesco, the overall learning achievements of students participating in the project have increased. About 84.2% of learners have higher scores in Burmese, 56.3% in Thai and 52.3% in maths.

Chit Ko is proof that technology can help bring education to all. 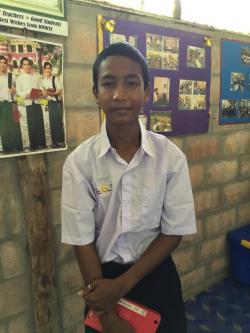 Chit Ko: Top of the class

Now 14, the boy is not only top of his class at school, but also received top scores in the Myanmar Non-Formal Primary Education (NFPE) examination in Kayin State.

His life inspires other kids. Another five migrant students from Sauch Kha Hong Sar and nearby so-called New Road learning centres finished with top scores out of 1,085 NFPE learners. Like Chit Ko, these five students are avid users of ICT devices.

As for Chit Ko, he's looking to pay forward the benefits he's received, mentoring younger students on how to use the tablets and encouraging them to read, and also continuing his own studies in a Non-Formal Middle School Education (NFME) programme. He has his parents' full support.

"My dream is to become an engineer one day because I love working with machines. I will study hard and do my examinations well and proceed with my higher studies in engineering. I hope I will be able to earn enough money to support my whole family, so my parents do not have to work so hard any more," said Chit Ko.