Accused black panther poacher Premchai Karnasuta attended the first day of his trial on charges that include killing a black panther in a national park. (Post Today photos)

Accompanied by his lawyer, Mr Premchai submitted his absence request, which the judges approved because his case carries a maximum sentence of just 10 years, said his lawyer, Withoon Phraiyaem.

Tuesday was the first day of the court hearing for the notorious illegal poaching case in which Mr Premchai and other three people are suspects.

It marked the start of the session for prosecution witnesses to testify.

Mr Premchai, president of the Italian-Thai Development Plc, was arrested and charged with poaching in Thungyai Naresuan Wildlife Sanctuary in February along with three other suspects in the case.

Mr Withoon said his client needs the time to manage both his company and his many physical illnesses.

Mr Premchai will appear in court again when the hearing of the defence witnesses begins, said Mr Withoon.

During his absence, Mr Premchai's lawyer will represent him.

Mr Withoon said the defendants would not pay the 12 million baht in financial compensation demanded by the Department of National Parks, Wildlife and Plant Conservation, because they maintain their innocence in the case.

The four defendants will submit their written statement against the demanded payment by Dec 6, he said.

Mr Withoon, however, said he wasn't confident the defendants would win the case although they would try their best to prove their innocence.

According to an informed source, there are a total 31 prosecution witnesses to hear until Dec 18, while the hearings of all 17 defence witnesses are set to begin on Dec 19 and end on Dec 27.

The witnesses who testified Tuesday were deputy national police chief Srivara Ransibrahmanakul and Wichian Chinawong, chief of the western complex of the sanctuary. 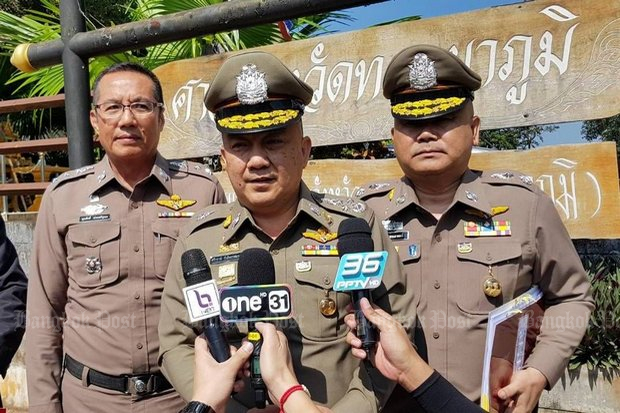 National deputy police chief Pol Gen Srivara Rangsibrahmanagul, earlier criticised for showing excess respect to Mr Premchai, was at the opening of the trial on Tuesday. He predicted the tycoon would be convicted of all six charges.

Speaking after testifying, Pol Gen Srivara said he was confident the prosecutors would maintain his "perfect" record and bring the culprits to justice.

Mr Wichain exited the courtroom at 5.30pm, and didn't given any media interviews.

However, shortly before he testified, Mr Wichain said he brought additional evidence, including 200 pages of documents.

In related news, Pol Gen Srivara said the investigation into the Oct 7 killing and butchering of a binturong, or bearcat, in Sai Yok National Park in Kanchanaburi, is now 90% complete.

Watcharachai Sameerak, assistant district chief of Dan Makham Tia, is among 12 suspects in this case.