The city police and the Mass Rapid Transit Authority of Thailand (MRTA) are preparing for the closure of the Lam Sali flyover to make way for the construction of a station on the MRTA's Orange Line.

Pattanapong Pongsupamit, MRTA's executive director for construction, said the inbound section of the flyover will be closed for 12 months later this week to facilitate the construction of an underground MRTA station.

After the construction is completed, the flyover will be reopened to traffic, he said, adding that the closure will start at 11pm on Friday, Dec 7.

The work on Lam Sali station is part of the MRT Orange Line's eastern route project, which runs from the Thailand Cultural Centre to Min Buri.

The 22.6-kilometre route will have 10 underground stations and seven elevated ones.

He said traffic police will be monitoring traffic congestion in the area and motorists will be informed of the detours they can take to avoid congestion. 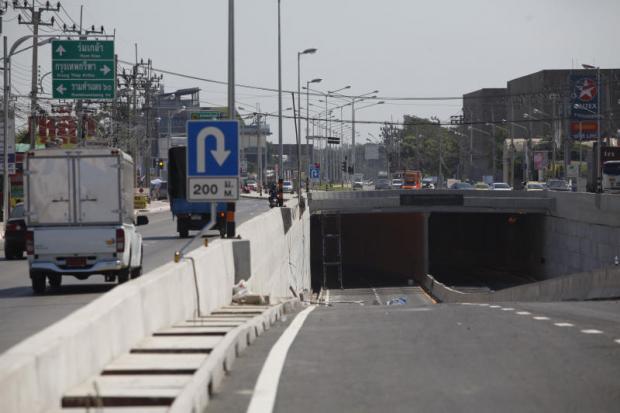 Tunnel vision  The underpass at Krungthep Kritha Road intersection, which is a part of City Hall's Srinakarin-Rom Klao road development project, is scheduled to open to motorists on Friday. (Photo by Varuth Hirunyatheb)

Contractors will have equipment ready to remove cars that break down or are involved in accidents along the construction site, Pol Maj Gen Jirasant said.

He urged motorists to plan their travel and study alternative routes in the area, as severe traffic jams are expected during the closure.

According to MRTA, the MRT Orange Line's eastern route, which is valued at 79 billion baht, will be open in 2023.

In a related development, the MRTA plans to invite investors to bid on the Orange Line's western route in February or March.

The 16.4-km western route, which stretches from the Thailand Cultural Centre to Taling Chan, is valued at around 96 billion baht. Construction is expected to take six years.

MRTA governor Pakapong Sirikantaramas said the western route will be developed under a public-private partnership model, and the agreement is expected to be submitted on Dec 11.