The black Mercedes-Benz remains wedged under the rear of the furniture truck on the expressway shoulder after the fatal crash. Two men standing at the back of the truck were knocked over the guardrail, falling to their death. (Photo by FM91bkk.com)

The elderly woman driver of a Mercedes-Benz involved in a fatal crash with a stalled furniture truck on an elevated expressway shoulder in Nonthaburi has been charged with reckless driving causing death.

Surang Supornsuk, 72,  owner and driver of the black Mercedes, told police that she suffered severe chest pain and passed out while driving on the Srirat expressway on Tuesday morning.

Her vehicle veered off the road and onto the hard shoulder, rear-ending the broken down furniture truck that was parked there, said Pol Col Kittisak Thiangkamol, chief of Rattanathibet police station.

Two men standing at the back of the parked vehicle, a converted pickup truck, were knocked over the guardrail and plummeted to their death, landing on a furniture shop below.

The crash  was reported to police about 9.10am.

The two victims were identified as Wutthichai Suracha, 32, of Nonthaburi; and Krit Waraklang, 22, of Nakhon Ratchasima.

Mrs Surang was admitted to hospital for treatment for chest pain.

There was a  third person travelling in the furniture truck, Panutchanart Khamaklang, 24, Krit's girlfriend.  She was sitting inside the truck and was not injured, Thai media reported.

A tearful Ms Panutchanart said she and Krit had planned to marry by the end of next year. 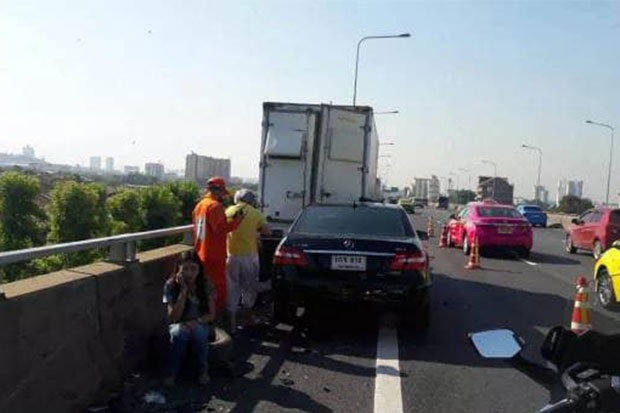 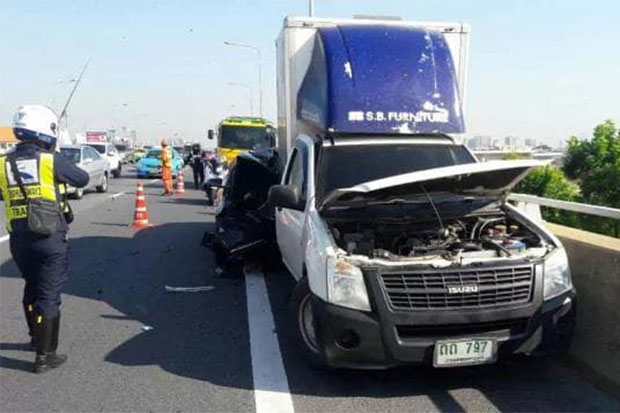