Police vehicles move at the centre of the city of Strasbourg following a shooting in eastern France on Tuesday. (AP photo)

A Thai man on holiday with his wife was among those killed in the brazen shooting at the famed Christmas market in Strasbourg, France, on Tuesday night - only a day after they arrived.

Anupong Suebsaman, 45, was shot in the head while visiting the crowded night market with his wife, Naiyana.

He was among the three people killed in the attack in which 12 others were wounded by the lone gunman.

It was reported the couple had arrived in France only a day before the incident.

The Foreign Ministry said on Wednesday said that the shooting occurred about 8pm Strasbourg time.  It was the act of a single gunman who was identified and being hunted. The suspect was initally reported to be on the French security authorities' blacklist as a "potential radical". 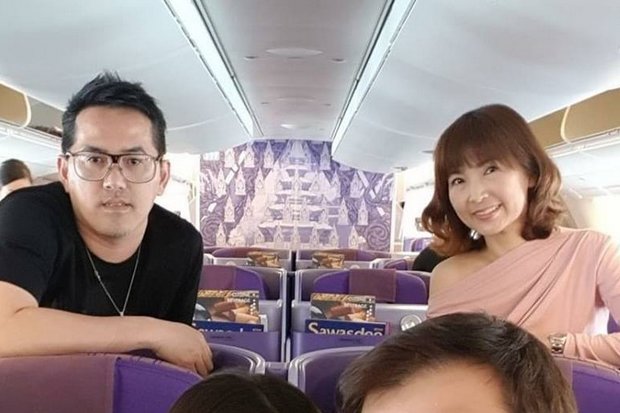 Later on Wednesday, an Interior Ministry spokesman said that Germany has no information indicating that a man suspected of killing three people in an attack on a Christmas market in Strasbourg has an Islamist background.

"From the German viewpoint, we have no information about the person concerned that points to an Islamist background," the spokeswoman told a regular government news conference.

Anupong was severely wounded and later died. He and his wife were on a visit to Strasbourg and Paris. The Thai embassy in Paris was arranging for accommodation for his wife, the ministry said.

After the attack, France immediately raised its terror alert level.

It was unclear if the market - a popular gathering place that was the nucleus of an al-Qaida-linked plot in 2000 - was the intended target. The assailant got inside a security zone around the venue and opened fire from there, Mayor Roland Ries said on BFM television.

Interior Minister Christophe Castaner, who traveled to Strasbourg, said the suspect, not named, had been convicted in both France and Germany for crimes unrelated to terrorism and served time. He did not elaborate.

Hours before the shooting, French gendarmes went to the suspect's home to arrest him, but he wasn't there, Stephane Morisse of police union FGP said. They found explosive materials during a search, he said.

France, where most of Europe's worst terror attacks of recent years took place, was raising its terror alert level and sending security reinforcements to Strasbourg, Castaner said early on Wednesday.

The attack came two years after a Tunisian man drove a hijacked truck into a busy Berlin Christmas market, killing 12 people. Strasbourg, which promotes itself as the "Capital of Christmas", on the border with Germany, about 500 kilometres east of Paris. The market, France's largest, is set up around the city's cathedral during the Christmas season.

About 350 security officers and two helicopters were searching for the assailant, who had been radicalised for "several years'' and confronted law enforcement officers twice, exchanging fire, while he "sowed terror,'' Castaner said.

More than seven hours after the bloodshed, the regional prefect said that 11 other people had been injured, five seriously, downgrading the minister's earlier count of 12 injured.

The shooter was also shot and wounded by soldiers guarding the Christmas market, according to Stephane Morisse of police union FGP.

French military spokesman Col. Patrik Steiger said the shooter did not seem to be aiming at soldiers patrolling in and around the market, but appeared to target civilians instead.

The market was closed Wednesday and festivities cancelled in a sign of mourning, Mayor Roland Ries said. Flags in Strasbourg were ordered at half-staff.

#Strasbourg shooting: Suspect on the run after two killed in #terror attack. Follow the latest on @FRANCE24 https://t.co/Dpj3aLsxrU pic.twitter.com/poJrGYborW