Comrades carry the coffin of Chief Petty Officer 2nd Class Kriengsak "Best" Pengphinit, who was killed Wednesday off Trat province by a rare encounter with a barred long tom fish.

The chief petty officer who bled to death after a fish cut his throat during training with the navy on Wednesday was the victim of a very rare attack by a 'barred long tom' fish.

She described it as the fastest fish in the world.

"These fish usually travel with their school and often hunt near the sea surface. This fish must have gotten lost and panicked," she added.

On Wednesday afternoon, Master Sergeant Kriengsak, 23, bled to death after being attacked in the throat by a fish with a long sword-like beak during naval training in Trat province. 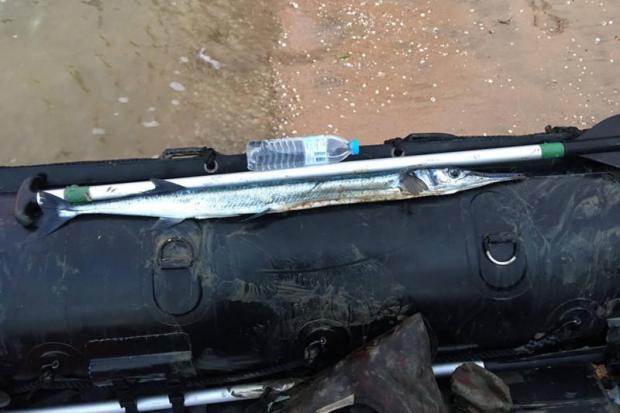 The barred long tom  is found off the coast of Trat province and in the vicinity of the Gulf of Thailand between December and February, she said.

It is known for its fast speed, reaching up to 90kph, and its ability to jump as high as one metre.

When fully developed, it can reach a size of 120 centimetres in length.

Despite its speed and threatening features, the barred long tom fish is generally harmless. Fishermen catch them for food as its meat is popular, especially in Vietnam.

This case is the first recorded instance of an attack by the barred long tom in Thailand, according to Assistant Prof Thon Thamrongnawasawat, a respected marine biologist at Kasetsart University.

"But do not panic. This type of fish is harmless. It is panicky and generally afraid of people," he wrote on his Facebook page.