Driver Yaya Jehmaeng poses for a photo with the very relieved Israeli tourist, Shahar Shimon, after returning her bag on Koh Phangan in Surat Thani province on Wednesday night. (Photo by Supapong Chaolan)

SURAT THANI: A van driver returned a bag containing US$9,000 (about 300,000 baht) to an Israeli tourist who left it behind in the car after arriving at her hotel on Koh Phangan.

Yaya Jehmaeng, 42, found the bag in the vehicle after receiving a phone call from the hotel asking if he had seen it.

The forgetful owner was travelling with a group of four tourists he took to the Srikantang Resort and Spa Hotel in tambon Ban Tai on Wednesday night.

Mr Yaya, who works for Phangan Transport, picked them up at the Thong Sala pier in tambon Koh Phangan.

An eyewitness said that one of the Israelis realised she lost her bag only when she was asked to show her passport at the hotel check-in desk.

The 21-year-old tourist, Shahar Shimon, was very relieved when the bag was returned to her, complete with all its contents.

Surat Thani governor Wichawut Jinto said he would present an honorary certificate to Mr Yaya for his contribution to the good image of the Thai tourism industry. 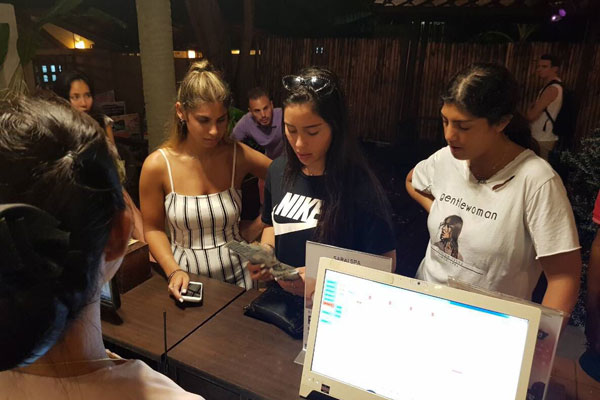 Shahar Shimon, in black, counts her money after her bag was returned to her. and finds it all there.  (Photo by Supapong Chaolan)