Customs officials have seized about 700 kilogrammes of European glass eels worth about 40 million baht at Suvarnabhumi airport, smuggled from Romania for sale in restaurants.

Customs chief Krisada Chinavicharana said on Friday that customs investigators learned that the protected eel elvers would be smuggled in from Europe falsely declared as frozen prawns.

Two consignments of the young eels were found at the airport, on Wednesday and Thursday. The first comprised three boxes weighing 357kg in total and the second also three boxes but with a total weight of 352kg.

European eels were an important economic fish in Europe and had long been popular in expensive restaurants. In mid-2009 the Netherlands government prohibited catching them in October and November,  to prevent their extinction because the population had plunged by 95% in the past four decades, Mr Krisada said.

The smuggled fish were young ones, elvers which were naturally transparent, so called glass eels. Possibly they were en route to another country where the dish is popular, said the customs chief, who valued them at 40 million baht.

The department would question the company that made the  false import declarations, find those responsible and prosecute them, he said. 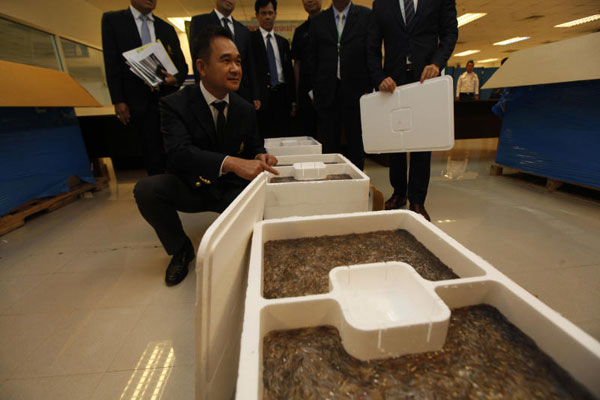